An Taoiseach Leo Varadkar has warned that the easement of the current Covid-19 restrictions will be "slow and gradual", but that a roadmap to reopen Ireland is being developed. Video: Oireachtas TV 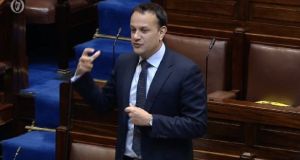 Leo Varadkar speaking in the Dáil

Taoiseach Leo Varadkar has said the roadmap to re-open Ireland to a “new normal” is being developed and will be approved by Cabinet on Friday.

However, he said the changes to the current restrictions will be made every two to four weeks and will not happen as fast as the restrictions were put in place.

And he warned that restrictions may have to be reintroduced “if it looks like the virus is going to surge back”.

Speaking during a sitting of the Dáil on Thursday, Mr Varadkar also raised the prospect of commercial flights recommencing in August and rejected claims the State was favouring carriers rather than consumers on flight refunds.

He also warned that the Government does not want to have to bail out failing airlines, after it emerged that Ireland is among 12 EU member states that wrote to the European Commission to make the case for vouchers instead of the current legal entitlement to cash refunds.

“I want to see Ryanair and Aer Lingus operate some time later in the summer, possibly August, and I would not like to be in a situation whereby we have to bail out airlines because they have failed,” he said.

The Dublin South West TD criticised the Government for “allowing airlines off the hook” and said Aer Lingus should be re-nationalised.

He said the Government “wants the airlines to be able to keep cash and issue vouchers instead, which is effectively bailing out the airlines with consumers’ money”.

The Taoiseach told him that whether carriers are publicly or privately owned “is not my major concern”.

Earlier Mr Varadkar called a special briefing with Chief Medical Officer Tony Holohan for Cabinet members on Thursday morning. Many ministers relayed their concerns about restrictions but it is understood Dr Holohan suggested there will be no major moves in easing restrictions when the current period of lockdown ends of May 5th. The Cabinet is to meet at 3pm on Friday to sign off on the exit plan from the lockdown.

Mr Varadkar s said gardaí and the PSNI need to co-operate to enforce movement restrictions on both sides of the Border, rather then the Government amending regulations to deal with day trippers.

It emerged that emergency legislation restricting movement to 2km from home did not cover visitors from the North unless they stayed overnight.

Mr Varadkar told the Dáil he had consulted the Attorney General and no changes to emergency legislation are needed.

“Unless we prohibit people crossing the border, which we are just not going to do, what is required is co-operation,” he said, adding that An Garda and the PSNI need to co-operate to enforce laws on both side of the border.

In the Dáil Mr Varadkar identified five criteria for future decision making on restrictions - the progress of Covid-19; along with healthcare capacity and resilience; testing and contact tracing capacity; the ability to shield at risk groups; and the risk of secondary morbidity.

He said that they will find a pathway out of the tunnel but “we are still in the tunnel and have some distance to go.”

Speaking in the Dáil the Taoiseach also expressed concern that people who need medical help are not seeking it. Mr Varadkar said “cancer hasn’t gone away”.

He said Ireland was now in sixth place in the world for testing per head of population and 160,000 tests had been carried out.

Personal protective equipment was now being delivered regularly to nursing homes but there were concerns that in homes with no Covid-19 cases there was a risk that someone could bring it in who was doing the testing.

Fianna Fáil leader Micheál Martin said here is widespread unease about the manner in which some decisions are being taken, and he said that there had to be more clarity on how policies are decided.

Sinn Féin leader Mary Lou McDonald said it was unfortunate that Government Ministers were thinking out loud and kiteflying and setting out May 5th as a red letter day and then accusing them of being complacent.

Ms McDonald said testing of up to 100,000 a week was necessary while the Taoiseach said that 100,000 was not a target but testing would take place as necessary.