Legislation to ‘get tough with insurance fraudsters’ introduced in Dáil

‘There is no downside to bringing a fraudulent claim’, says FF’s Barry Cowen 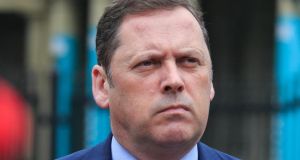 Barry Cowen TD: ‘There can be no other action taken. It is then up to the Director of Public Prosecutions to take up the case and seek a conviction’. Photograph: Gareth Chaney/Collins

Anyone who robs a bank and is caught will have the “book thrown at them” but if insurance claim fraudsters are found out there are absolutely no consequences, the Dáil has been told.

Fianna Fáil public expenditure and reform spokesman Barry Cowen said that those found “to have knowingly made a fraudulent claim should suffer the consequences”.

Introducing the Civil Liability and Courts (Amendment) Bill Mr Cowen said it would “get tough with insurance fraudsters”.

The Offaly TD said “there is no downside to bringing a fraudulent claim. There have been a number of cases where claims have been thrown out but there is no follow up for penalty” he said, “no prison sentence, no crime, no recognition of the significant cost incurred by those having to defend against the claims”.

Currently the only thing a court can to in a fraudulent case is to dismiss the action, he said. “There can be no other action taken. It is then up to the Director of Public Prosecutions to take up the case and seek a conviction.”

This Bill will amend existing legislation where a case is dismissed “the claimant will have to pay the legal costs of the defendant. This will increase the cost for knowingly misleading the court.”

Mr Cowen said the Alliance for Insurance Reform highlighted comments by a member of the public at one of their meetings, which was at the heart of the problem. He quoted: “If I have a need for big money I have a choice between robbing a bank or faking an injury, I’d pick the fake injury every day – more money and no consequences if I am found out”.

He said however that they could have all the penalties in the world but it would not change anything if cases were not brought before the courts and if An Garda Síochána did not put mechanisms in place to deal with suspected fraudulent cases.

Insurance reform was too slow and “we’re still waiting for a national claims information data base which was supposed to be in operation in June 2018”, he added.

They were also still waiting for a system to compel insurance companies to inform policy holders of claims made against them; for a Judicial Council to be established to tackle the level of personal injury awards; for a publicly funded insurance fraud unit in An Garda Síochána; and for an integrated insurance fraud data base.

Minister for Justice Charlie Flanagan said they were close to the provision of a Judicial Council, legislation for which was at an advanced stage through the Oireachtas.

Mr Flanagan said the Government will not oppose the Fianna Fail legislation and would be happy to engage with the party “to ensure the legislation is constitutionally sound and legally robust”.

The Government was “very conscious of the issue” but he pointed out that the courts already have powers to award against plaintiff and have done so in the past.

Sinn Féin’s Maurice Quinlivan said research had shown that the biggest challenge for businesses was the exorbitant cost of insurance.

The Limerick TD added that insurance companies are “having a real laugh” at businesses, householders and politicians over insurance costs as they report significant profits.