US Speaker Nancy Pelosi to meet Higgins and visit North 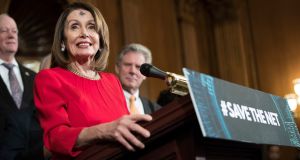 The Speaker of the US House of Representatives Nancy Pelosi will meet President Michael D Higgins on Wednesday as part of a US Congressional delegation visit to Europe.

Ms Pelosi is also due to make a speech in the Dáil to commemorate its 100th anniversary.

On Friday night Ms Pelosi released a statement providing more detail on the delegation’s timetable for the visit which will includes visits to Dublin, Northern Ireland, Stuttgart and London,

“We will meet with senior government officials and local leaders to learn more about the future of the UK and Ireland amid Brexit and to express America’s enduring commitment to a peaceful and prosperous future for all who live there,” the statement said.

“The United Kingdom and Ireland each have a deep and special bond with the United States, ” said Ms Pelosi.

On Wednesday 17 April President Higgins will host a working meeting for a US Congressional delegation, led by Ms. Nancy Pelosi (@SpeakerPelosi).https://t.co/8XlVQfNutF pic.twitter.com/ZqllMhaGS6

“Our distinguished delegation is travelling at a critical moment for two of our closest allies, and we look forward to high-level discussions about the path forward on our shared security and economic interests.”

The veteran Californian politician has been a congresswoman since 1987, and was first elected speaker of the House in 2006. She was also elected to that position in January this year after the Democrats gained control of the House and is the first woman to hold that office.

Viewed as liberal and left-leaning, Ms Pelosi has long been a target and a figure of antipathy for Republican opponents.

Ceann Comhairle Seán Ó Fearghaíl announced the speech, which will come as part of a visit to Ireland by the 79-year-old Ms Pelosi.

“I am delighted that Speaker Pelosi has accepted my invitation to make this address, which will mark the centenary of the Dáil’s establishment and will further highlight the enduring bonds of friendship between our two legislative assemblies,” he said.

“I am particularly mindful of the help and support given to the nascent Irish Parliament by the United States House of Representatives one hundred years ago, and the support given by both Houses of Congress in the intervening period.”

Congressman Richard Neal, who supported the E3 visa Bill, that would have introduced new US visas for Irish people, is among the US delegation.