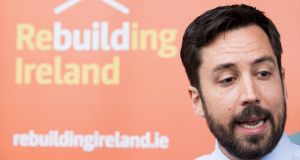 Minister for Housing Eoghan Murphy announced the Rebuliding Ireland Home Loan scheme in January of last year for people who had been turned down when applying for a mortgage. Photograph: Tom Honan/The Irish Times.

The Government has to consider whether it will increase funding for a suspended State-backed mortgage scheme, Taoiseach Leo Varadkar has said.

He said they also had to consult the Central Bank to establish whether it is “comfortable” with going beyond the €200 million current fund and to see if it is in line with spending rules created to avoid a property market crash.

During a heated Dáil exchange with Fianna Fáil leader Micheál Martin, who claimed the Government had “dashed the hopes” of young people trying to buy a home, Mr Varadkar said the number of approvals granted for the Rebuilding Ireland Home Loan showed the success of the project.

Minister for Housing Eoghan Murphy announced the scheme in January of last year for people who had been turned down when applying for a mortgage. It allowed them to borrow up to 90 per cent of the price of a home from a local authority. The scheme applied to single people earning less than €50,000 and €75,000 for a couple.

It was intended to deal with 1,000 loans over three years but a Freedom of Information reply to RTÉ showed that more than 1,500 loans had been recommended for approval and the scheme had been suspended.

Mr Martin claimed Mr Murphy had first insisted there would be enough funding for the scheme to meet the demand and that there was a pledge of more funding above the €200 million promised, but this is not the case.

“The Minister said there was going to be no issue here and that he would set up a second fund,” Mr Martin said, adding that young couples faced paying more in rents than they would for the mortgage.

Mr Martin said the press office been briefed and told that no further approvals should be issued pending a review because applications had far exceeded expectation. He asked “what planet” Mr Murphy was on.

“If you tell your press office surely the public deserve to know,” he said, adding that there was a “continuing lack of respect” for the Dáil, which had not been informed. “Why all the secrecy and silence about it? Why can’t you guys be up front with people and straight with people?”

However, the Taoiseach said the Government was trying to help people while the Fianna Fáil is “prancing around the place” and “wagging the finger”.

Mr Varadkar said the government had helped 10,000 people buy their home through tax relief, 575 people had received the home loan and another 1,000 had been approved.

He said that since the €200million ceiling was now exceeded, the Government was considering whether more money should be provided. He said the Government had to consult the Central Bank to establish if it was “comfortable” and if it was in line with lending rules aimed at avoiding a property market crash.

Revealed: The secret to flapjacks that don’t fall apart