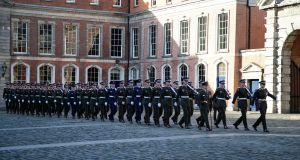 Minister of State for Defence Paul Kehoe: ‘I do not believe there will ever be a European army.’ Photograph: Nick Bradshaw/The Irish Times

A Fine Gael former minister for defence has accused the Government of attempting to “join the big boys” on European defence projects in a “creepy crawly, step-by-step” way.

Sean Barrett, now a Government backbencher for the Dun Laoghaire constituency said he was concerned about the direction in which Ireland seemed to be getting pushed by the EU on defence matters.

“I do not want to join the big boys and be part of a European army that gets involved in all sorts of crisis management and many other things that are doubtful,” he said.

Speaking during a short Dáil debate on a proposal for Ireland to participate in a European Defence Agency project on building up military search capabilities, Mr Barrett said he did not understand why the Government wanted to join the “big boys” on European defence matters.

Mr Barrett, who has previously expressed concern about Ireland’s direction of travel on defence, said Ireland’s Defence Forces did not operate on the basis of arriving on missions “armed to the teeth”.

They “arrived with groups of people who have been trained on how to integrate into the local community, to become trusted by that community and to bring about a peaceful solution”.

He said: “Our Army can do far more by staying on the road it is on where it has been very successful.

“We must stand up and say we are in favour of peacekeeper s and that we are proud of the peacekeeping work the Irish Defence Forces have done over the years in various parts of the world.”

The Fine Gael TD warned that the Government should not be pushed into projects. “I would prefer a proper and wide debate on where we are going, where our Defence Forces are expected to go and what we are going to do about participating in various missions.”

But Minister of State for Defence Paul Kehoe who introduced the debate, the third in two weeks on EU defence issues, rejected the accusation that he is “leading the way to a European army” or that Ireland’s policy on neutrality was being changed.

Mr Kehoe said: “I do not believe there will ever be a European army. I am not changing our defence policy on neutrality.”

It would be TDs “and the general public who will have the final say on a European army”.

Explaining the project, Mr Kehoe said it aimed to develop common processes, techniques and procedures for military searches and would enable the State to keep abreast of best practice and new developments in a cost effective manner.

He pointed out that the Defence Forces engage extensively in specialist military search activities,dealing with unexploded ordinance and improvised explosive devices.

He said the project would cost a total of €2.28 million and would be funded by eight EU states with Ireland’s contribution totalling €157,500 of which €102,500 would towards hosting an international seminar and a number of training events and a direct contribution of €55,000.

Fianna Fáil defence spokesman Jack Chambers, whose party supports the project, noted the “breathtaking speed” at which the Minister advanced this business through the Dáil while defence matters of pay and conditions “do not receive the same level of attention”.

He said there had been continuous delays on pay matters “yet this proposal is being advanced within a two-week window”.

Labour spokesman Brendan Ryan backed the project and said the search and detection of explosive devices was a much needed skill. “We got a stark reminder of this need a few weeks ago in Derry when a car bomb was detonated within the city walls,” he said.

But Sinn Féin defence spokesman Aengus Ó Snodaigh said this motion and previous ones are “further steps to ingrain our Defence Forces, our foreign policy into the European military project, to make our Defence Forces more dependent on an more integrated into an EU army”.