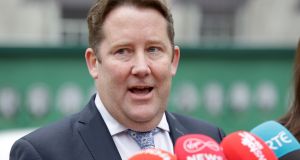 The long-awaited review of the local property tax (LPT) is nearing completion and will shortly be considered by Minister for Finance Paschal Donohoe, the Government has said.

The self-assessed tax is charged on the market value of residential properties in the State but the amount levied has been frozen since 2013.

Increases in the tax were due to be implemented this year. It was instead sent for review by Government amid concerns among householders, particularly in Dublin, that they would be subject to sharp and punitive increases as a result of a large rise in property values in recent years.

A Government spokesman said on Tuesday the forthcoming publication of the review was one of the reasons the Cabinet had decided to seek a deferral of six months of a private members Bill tabled by Fianna Fáil in the Dáil this week.

The Management Fees (Local Property Tax) Relief Bill 2018 proposes reductions of up to €300 per annum in LPT for homeowners who live in managed estates, apartment complexes and multiple-unit developments.

Its housing spokesman, Darragh O’Brien, said it was aimed at people who already paid management fees for services where they lived and would be paying “on the double” if also charged the full property tax.

Mr O’Brien said the amendment could benefit up to 500,000 people in the State. He said the Bill proposed a reduction in the tax of one-third up to a maximum of €300.

He said the measure would cost the exchequer €17 million each year in lost revenue.

“It is a small incentive to those who are paying their management fees.”

But Minister of State Sean Canney rejected the claims that householders in management estates or apartments were paying on the double and said the contention “does not stand up to scrutiny”.

He said the Bill appeared to be inequitable because the bulk of local property tax payers did not pay managements fees.

The Minister added that the time was needed to consider the review, cost the measures in the Fianna Fail Bill and to identify ways “the yield forgone can be made up”.

Government Ministers at the weekly Cabinet meeting yesterday decided not to oppose the Bill but to ask for it to be deferred for six months, to allow Mr Donohoe time to consider the review of the LPT and the charging system that is proposed.

The spokesman said if the Bill was supported by a majority in the Dáil, it might be subject to a “money message” – a device that can block the further passage of legislation on the basis that no private members Bill can involve a cost to the exchequer.