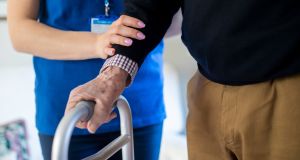 Sinn Féin Louth TD Ruairí Ó Murchú said he had been shown figures indicating that all the deaths were linked to coronavirus. File photograph: Getty

Twenty-six people are believed to have died in a nursing home in Co Louth, the Dáil has been told as calls were made for an investigation into what happened in the residential setting.

Sinn Féin Louth TD Ruairí Ó Murchú said he had been shown figures indicating that all the deaths were linked to coronavirus. He called on Minister for Health Simon Harris to confirm that number of fatalities was correct.

This is believed to be the largest number of coronavirus-related fatalities recorded in any nursing home.

Mr Ó Murchú also said there were growing calls from families and staff for an investigation into what happened in Dealgan House nursing home.

Last month a HSE hospital group took over the Co Louth home as it struggled to deal with an outbreak of the virus, when it was believed 10 people in the home had died.

The RCSI hospital group took over management of the privately owned Dundalk home which accommodates 63 residents.

Mr Ó Murchú said he had been told by employees at the home that RCSI staff would no longer be in place by the weekend.

“I am told that senior management and disease-control specialists from the RCSI are already gone.”

He said he had repeatedly asked the hospital group for clarity on the issue and “while they say they remain in control at Dealgan they will not say for how long and crucially have not outlined when and under what conditions the RCSI will hand back operational control to the owners of the nursing home”.

Mr Ó Murchú said “staff, residents and families are desperate for answers about the RCSI plans at Dealgan House”.

He also said he had been informed that the owners of the home had been in contact with the HSE about the “worsening situation at the home”. He asked if the Minister was aware of these contacts and why it was only 10 days later that the RCSI hospital group took control of the home.

Mr Harris, who extended his sympathies to families, friends and staff in Dealgan House nursing home said he would have to liaise with the HSE on the question in relation to the RCSI involvement.

“I know they have been playing a pro-active role”. He said he would revert directly to the HSE on the issue.