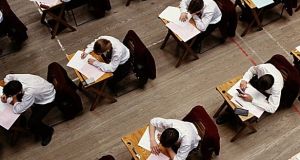 ‘The stress these students have been put under is intolerable.’ File photograph: The Irish Times

The Government will “try to bring a conclusion” this week to uncertainty surrounding the Leaving Certificate, Taoiseach Leo Varadkar has told the Dáil.

Mr Varadkar said it was possible to carry out the exam within existing public health guidelines “but it would not be the leaving certificate as we know it. If it is cancelled we must make sure that we can put in place an alternative which would be fair, which is extremely difficult.”

He was responding to sharp Opposition criticism of the handling of the crisis, claims of “dysfunctionality” in the Department of Education and allegations that the Government was “bullying” students.

Comparing Ireland’s response to that of other European Union states on handling final exams, he said that “nowhere has there been such a lack of clarity and confusion. The fact that the reopening document published last week failed to address it is remarkable. We are now beyond the stage where clarity must be provided and the Government must be honest about the ability to complete the leaving certificate in the coming months.”

Labour leader Alan Kelly described the Government’s handling as “an unmitigated disaster” and he called for the Taoiseach to intervene.

“The stress these students have been put under is intolerable. This needs to be finished. We need a plan B and it needs to be out there this week.”

He said “the handling of it by the Department of Education shows a dysfunctional that has not been seen in some while”.

Solidarity TD Mick Barry said there was a “crisis of democratic legitimacy” around the exams as he pointed to a survey of almost 24,000 students, 79 per cent of whom wanted cancellation and just 15 per cent wanted the exams to go ahead.

Mr Barry said students felt they were “in effect being bullied by the Government”.

He added that “in 20 years as an elected public representative, I have never before seen a Government decision cause so much mental anguish to so many young people”.

But the Taoiseach said that “opinion polls are only opinion polls” and he was surprised that Mr Barry “thinks that they have some sort of democratic legitimacy when it suits him, but not when it does not”.

Mr Varadkar said that “if it is cancelled we must make sure that we can put in place an alternative which would be fair, which is extremely difficult”.