Changes to property tax delayed until 2020 ‘at the earliest’ – Taoiseach

Less-well-off counties will see shortfalls made up, but rates will not rise with house prices 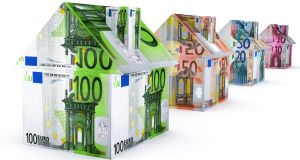 Leo Varadkar said property tax bands and rates would be reformed to ensure that any changes would be modest. Photograph: Alex Slobodkin/ISPC

Any changes to local property tax will not be introduced until 2020 at the earliest, the Taoiseach has said.

Leo Varadkar told the Dáil there will be no property tax changes this year.

He said that bands and rates would be reformed to ensure that any property tax changes would be modest.

The Taoiseach told Mr Cassells: “I appreciate that there is a feeling out there that because people’s house values have increased to such an extent in the past couple of years, they will see a corresponding increase in their property tax rates.”

But he insisted “that will not happen”.

With reforms of the bands and rates “in many cases, there will be no increases at all, while some may even see a reduction, depending on the value of their homes”.

Mr Cassells also asked how the Taoiseach would be able to ensure, as he had stated was his intention, that local authorities would be able to retain all of the local property tax raised in their own areas.

The Meath TD said the Taoiseach had committed the Government to meeting the budget shortfalls of less-well-off counties, but he asked if that meant that local authorities in counties like Dublin and Meath would receive income from property tax, but lose central-government funding to other counties.

Mr Varadkar said that many people “wish to see the property taxes they pay stay in their counties. That makes sense to me.”

They would have to have an equalisation fund to ensure less-well-off counties did not lose out.

“However, that could be funded from central taxation rather than the local property tax,” he said.