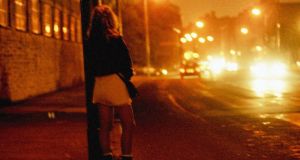 Criminalising the purchaser of sexual services rather than the seller is one of the main provisions of the Bill which also strengthens laws to combat child pornography and prevent the sexual grooming of children. Photograph: Paul Barker/PA

An Opposition amendment to prevent the Government criminalising the purchase of sexual services has been defeated by 100 votes to 10 with one abstention.

The Anti-Austerity Alliance-People Before Profit group who introduced the amendment to the Criminal Law (Sexual Offences) Bill were divided on the issue. Bríd Smith who proposed the amendment was supported by Gino Kenny but opposed by Ruth Coppinger and Mick Barry.

Fianna Fáil, Labour and Sinn Féin supported Fine Gael and the Independent Alliance on the legislation as did the Social Democrats.

Criminalising the purchaser of sexual services rather than the seller is one of the main provisions of the Bill which also strengthens laws to combat child pornography and prevent the sexual grooming of children. It also updates provisions on incest and indecent exposure.

Ms Smith said the justification for criminalising the buying of sex was based on the Norwegian/Swedish model of legislation where the measure was first introduced.

But she believed the Bill failed to understand that the most recent research raised very profound questions on the issues around criminalising the buyers of sex.

She said organisations such as Amnesty International said that criminalising the purchase of sex was driving sex work underground and driving sex workers into more precarious and dangerous lives.

Independents4Change TD Mick Wallace said reports including from government agencies in Norway and Sweden had shown reports of greater harassment on the streets increased competition for clients and more pressure on sex workers to accept riskier clients who were aggressive or drunk.

The legislation deterred those who did not want to commit a crime but not those who actually intended to abuse sex workers.

Independents4Change TD Clare Daly said the theory of the Nordic model was that “if you criminalise purchase of sex demand will be reduced”. But she said “there is no evidence that supports that viewpoint. When did prohibition ever work?”

Tánaiste and Minister for Justice Frances Fitzgerald insisted however that targeting demand would in time reduce the numbers of young men and women in prostitution.

She said in Sweden 95 per cent of women in prostitution were victims of trafficking and many women in Ireland were also in this predicament.

Ms Fitzgerald said “demand reduction is absolutely appropriate”. Referring to the effect on male behaviour she pointed out that “the market has decreased in Sweden and many other European countries”.

She added that there was much research to support the criminalisation of the purchase of sex. The Minister accepted there were different views “but this is the approach I am recommending based on good evidence”.

“I’ve looked at the research and the experience of states who have addressed prostitution in a different way and the goal of these provisions is primarily to target the trafficking and sexual exploitation of persons through prostitution.

“The Council of Europe and European parliament have recognised the effectiveness of the criminalisation of the purchase of sexual services as a tool in the fight against human trafficking.”

The State was joining Northern Ireland, Sweden, Norway, Iceland, Canada and France with this provision.

“I fully recognise that if we criminalise the purchase of prostitution it’s not going to end it. It is still going to continue.” But he said if they adopted that argument on everything “we’d criminalise nothing”.

He said it was extremely important that men recognised that they had a responsibility. He said men get involved in an abusive situation with women and “up to now they’ve been able to walk away scot free and the woman is the person who has to face the consequences of it”.

Sinn Féin justice spokesman Jonathan O’Brien said his party supported the turn off the red light campaign, which favoured criminalisation of the purchase of sex.