Minister appeals to Guinness family to donate Luggala to State

Luggala, Co Wicklow: it was offered officially for sale by the trustees of Barbican International Corporation, a Guernsey-based Guinness family trust

Minister of State Michael Ring has appealed to the Guinness family to donate its ancestral home of Luggala Lodge and lands in Co Wicklow to the State.

He said the Government could not afford the €28 million asking price for the seven-bedroom 18th-century lodge on 5,000 acres near Roundwood.

“The State doesn’t have that kind of money,” he said. “The department could only consider acquiring this property if the price fell within a certain range in this context.”

Mr Ring, who has responsibility for regional economic development, pointed out that “the scope for funding for the conservation of our built heritage is currently constrained by the significant reduction in the public finances”.

He referred to the State’s purchase last year of almost 5,000 acres of neighbouring land in the Wicklow National Park for €800,000 when €4 million was being sought.

Should the Guinness family donate to the State, “it would by any measure be a significant addition to our stock of publicly-owned heritage properties and lands and would add greatly to the integration of the Dublin and Wicklow national parks”, he said. 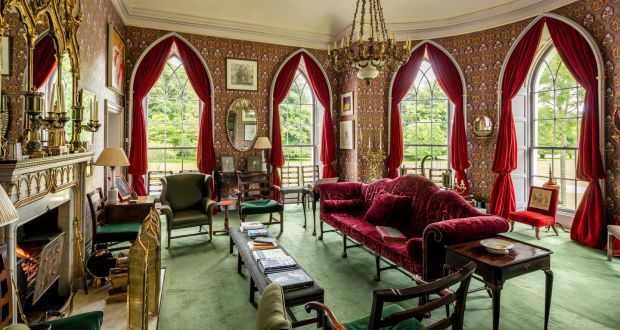 “Indeed it would sit on a par with the family’s far-sighted and generous donation of Iveagh house and gardens to the State in 1939.”

The Minister said that if the family considered donating the estate, “I will negotiate with them and would certainly make sure that the State protect and look after the property”.

Mr Ring was responding in the Dáil to calls for the State to purchase the estate, which was offered officially for sale by the trustees of Barbican International Corporation, a Guernsey-based Guinness family trust.

Labour arts spokeswoman Joan Burton said the owner, founder of Claddagh Records Garech Brown, had made an outstanding contribution to ensuring the preservation of the estate and of Irish culture and music.

“His stewardship of Luggala has also ensured that the vast majority of the estate, other than the specific area around the house, has become a favourite for both locals and tourists.”

She expressed concern that “unless the State intervenes, Luggala could be swept up by a wealthy private investor, with all the uncertainty that might come with that in terms of access. State ownership would also ensure the pristine condition of the estate is maintained.”

AAA-PBP TD Gino Kenny, who also called for the State to acquire Luggala, described the Minister’s response as positive. He referred to Mr Ring’s comments that the department could also consider acquiring the property if the price fell within a range.

“Are you saying that if the price came down dramatically that the State would make an engagement with the owner?”

Mr Ring replied that the Guinness family had a great connection with Ireland. “I’m asking them, maybe consider offering this to the State and I’m prepared to sit down and negotiate with them. But I would hope that they would hand that over to the State like they did with Iveagh House.”

He said: “Should a donation of the property by the family be in prospect I’d be very happy to entertain overtures from the vendors as to the presentation of the house and lands as a publicly-owned and accessible property.”

0:49 Snap election after Poots resignation could be run as ‘referendum’ on protocol – Coveney

Good weather to take a turn this weekend with rain expected 13:55
Snap election after Poots resignation could be run as ‘referendum’ on protocol – Coveney 13:47
In The News: Is Donald Trump’s relevance fading? 13:20
Cyclist seriously injured in hit-and-run in Tallaght 13:11
Underage drinkers buying alcohol via delivery services, charity warns 12:45

5 In The News: Is Donald Trump’s relevance fading?