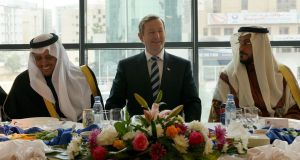 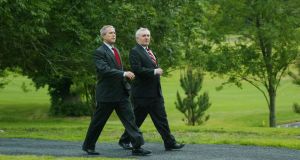 Former US president George W Bush with Bertie Ahern as they go for a stroll around the grounds of Dromoland Castle in Co Clare in 2004. File photograph: PA/Maxwell’s 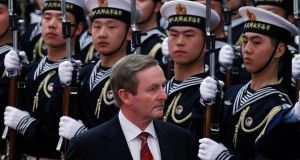 Enda Kenny inspects the guard of honour during an official welcoming ceremony at the Great Hall of the People in Beijing in 2012. Photograph: David Gray/Reuters

If it wasn’t already clear enough from the campaign that brought him to the White House, then the dark, chaotic opening to Donald Trump’s presidency has confirmed one thing at least. The old rules no longer apply.

For US allies, the certainties that underpinned relations with Washington for decades are suddenly in flux. Across the world, governments look on anxiously, seeking what little reassurance they can find in the scattergun pronouncements of a volatile leader and his opaque inner circle.

For the Government in Dublin, figuring out an appropriate modus operandi for dealing with the new US administration has particular urgency, given that preparations are already under way for Taoiseach Enda Kenny’s visit to the White House for the annual St Patrick’s Day “Shamrock Summit”. Since it began in 1981, the annual ceremony has been seen as the most important appointment in the Irish diplomatic calendar, a unparalleled, soft-focus opportunity to speak face-to-face with the US president while promoting trade, tourism and the interests of Irish America.

This year, however, in light of Trump’s executive order banning immigrants from seven Muslim-majority countries, the Government faces opposition calls to boycott the St Patrick’s Day event. Even if it goes ahead, as Government sources insist it will, Mr Kenny’s visit will be scrutinised like never before. Will he criticise Trump’s actions? Will the ceremony take place in public? Will it provoke a backlash at home?

For Irish officials, the dilemma is how to strike an appropriate balance between acting in such a way as to retain influence over a vital ally and protect Irish national interests, on the one hand, and ensuring that Kenny is not seen to endorse policies that are anathema to mainstream Irish opinion. It’s a measure of the changed environment that, when Irish officials discuss how best to strike that balance, they point to relations with authoritarian regimes across the world as evidence that these questions are hardly new.

According to senior officials, the Government is hoping the St Patrick’s Day event will follow the long-established format. That means a shamrock ceremony for the cameras followed by brief comments from Trump and Kenny followed by a number of other Irish-themed events in Washington. Asked whether Dublin might seek a more low-key or private event, the Irish side is emphatic. “Definitely not,” says one high-ranking official. “If we were that nervous we wouldn’t go at all.”

For the Department of Foreign Affairs, US-Irish relations are far too important to run the risk of alienating the White House with an early snub. “We have so many irons in the fire when it comes to our relationship with America,” says one ex-ambassador, who lists issues such as the undocumented Irish, foreign direct investment and the uncertainty caused by Brexit. Refusing to engage with Washington would be self-defeating, he says. “If there is one thing we have learned from our own peace process in the North, it’s that you’re better off talking than not.”

This is echoed by Niall Holohan, who retired as ambassador to Saudi Arabia in 2014. “Ireland cannot turn its back on the most important country in the world simply because we do not approve of that country’s policies on immigration and other issues,” he says.

Officials in Iveagh House, headquarter of the Department of Foreign Affairs, insist Kenny will find a way of expressing Irish concerns. On his visit to Washington this week, Minister for Foreign Affairs Charlie Flanagan told journalists he had pointed out to Trump’s national security adviser, Mike Flynn, the “damaging consequences” of the immigrant ban. This, rather than a public exchange of differing views, is likely to be the approach Kenny will take with Trump next month.

“There is always a way to do this,” says the ex-ambassador. “Whether you say it in public or in private is always the choice to be made.... But you have to resist the temptation to shoot from the hip.”

On the general principle of dealing with countries accused of human rights abuses or discrimination, Mr Holohan says it is important that the Government not adopt a “holier than thou attitude”. Ireland’s own own reputation is “hardly unblemished”, he says.

“At the same time, even while maintaining good bilateral relations, we have to make it clear that any disregard for basic human rights is unacceptable to us. The secret is to get the balance right between causing offence and protecting our own national interests. By and large, I believe we achieve a better balance than most countries in this regard.”

A key point, Mr Holohan argues, is that open criticism of Trump is hardly likely to yield results. Ireland could be far more effective, he suggests, by working through Irish-American institutions and offering full support to EU positions on migration and other issues. On the other hand, however, “I believe we should not fall into the trap of cosying up to President Trump to protect our national interests as Theresa May appears to have done last week (and Tony Blair did earlier with George W Bush). Such action will only backfire on us.”

The second ex-ambassador remarks that, if every state were to stop talking to governments whose laws or policies they found objectionable, Ireland could find itself ostracised by some capitals. “People could stop talking to us because of our laws on abortion,” he says. “I’m not taking a view on whether abortion should be allowed, but a lot of European countries find it very hard to understand why we don’t permit abortion, for example, in cases of rape or incest. No county is perfect. We all have our particular issues.”

Officials point out that when President Michael D Higgins visited China in 2014, he raised concerns about human rights without causing undue offence. In the same year, by contrast, Mr Kenny drew heavy criticism when it emerged that he did not raise human rights concerns during a trade mission to Saudi Arabia and Qatar. “I think the system has learned the lesson from that trip,” says one official.