Noonan rules out commission of inquiry into Nama for now 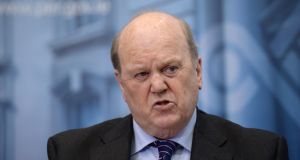 Minister for Finance Michael Noonan told the Dáil on Wednesday Nama had provided all documentation and had answered all questions put to it regarding suspicions about any transaction. Photograph: Dara Mac Dónaill/The Irish Times

Minister for Finance Michael Noonan has again ruled out a commission of inquiry into the National Asset Management Agency (Nama) for the moment.

Nama is a body created by the government in late 2009 in response to the Irish financial crisis and the deflation of the Irish property bubble.

He told the Dáil on Wednesday Nama had provided all documentation and had answered all questions put to it regarding suspicions about any transaction.

“A commission of investigation, if progressed, cannot attempt to supplant or circumvent the functions of the Garda or any other law enforcement agency,’’ he added.

“To do so would be inappropriate and could jeopardise legitimate investigations and certainly would not be welcomed by the appropriate authorities.’’

Mr Noonan said it was obvious, but often overlooked, that a commission of investigation could not deal with wide-ranging and non-specific claims.

“If there is a political desire to advance a commission of investigation, the House must take collective responsibility for its costs, timing, terms of reference and implementation,’’ he added.

He said Nama was already accountable for its operations under the Nama Act.

“The Public Accounts Committee chairperson came before the Dáil this morning and said that there will be a report available in one to two months, so it is premature to be having this discussion until that report is available.”

“There is a tendency to call for a commission of inquiry into everything that requires debate. That would cost additional millions and that money could be better spent.

“We could get more information from the PAC.”