Adults in direct provision ‘to be allowed to work’ 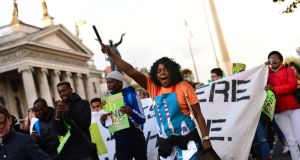 Adults in direct provision will soon have access to the labour market, Minister for Justice Charlie Flanagan has said.

He said residents had been given access to the services of the Ombudsman and the Ombudsman for Children, which was a very important step forward.

The Minister, who was speaking in the Seanad on Wednesday, said there had been a great deal of criticism of direct provision over the years.

While much of it was warranted, some of the criticism was not, he added.

“All states have to set and implement rules about people coming to the state,’’ he added. “Asylum seekers must apply for international protection status under international law on defined grounds.’’

Mr Flanagan said the system was a guarantee that every person who walked into the international protection office would have a bed, food, a shower, medical care, information and access to a wide range of services.

“I have yet to hear a credible alternative being proposed in almost two decades to the current system,’’ he added,

“All that being said, I recognise that the way this system operated for many years was wholly unsatisfactory.’’

He said the system was beset by problems as the State sought to grapple with a large volume of asylum applications, something Ireland was not used to.

Last May, a Burmese man who spent eight years in direct provision before getting refugee status unanimously won his Supreme Court appealover laws preventing him working here before his status was decided.

The seven judge court unanimously agreed the absolute ban was “in principle” unconstitutional but has adjourned making any formal orders for six months to allow the legislature consider how to address the situation.

The court found, “in principle” and when there is no statutory time limit for processing asylum applications, the “absolute prohibition” on asylum seekers seeking employment in the 1996 Refugee Act - and continued in the International Protection Act 2015 - was contrary to the constitutional right to seek employment.

Irish Refugee Council chief executive Nick Henderson said Mr Flanagan’s statement that people in the asylum process will be given the right to work is positive.

“However, any other response would be contrary to the Supreme Court’s decision which made a clear finding that an indefinite ban on the right to work is unconstitutional,” he said.

“The detail of how this right will be given to people is crucial.

“We are calling for someone to be given the right to work after six months of waiting for an asylum decision and no restrictions be placed on what professions a person can enter and that self-employment also be allowed.”