Green party: ‘We are further behind than ever’ in meeting environmental targets 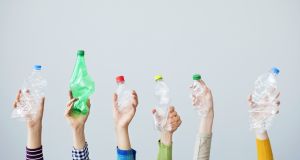 Irish people use and dispose of 200 million coffee cups every year and 210,000 tonnes of plastic only 40 per cent of which is recycled, the Dáil has heard.

Ms Martin said the Taoiseach in an address to the European Parliament, and when he was seeking the leadership of Fine Gael, pledged that “Ireland would be a laggard no more”, but she said “we are further behind than ever before”.

The Government has said it will abstain on the private member’s Bill which establishes a 20c deposit and return scheme on drinks containers; bans single use plastic items including cups, cutlery and straws; sets up a new municipal compostable collection system for paper and card based cups and cutlery to be collected and turned into compost; and a 5c levy on compostable and 15c on non-compostable cups and cutlery.

Mr Ryan claimed that by abstaining on the Bill it was a “do nothing exercise from a do nothing Government on the environment”.

He said the Bill’s contents were not anything extraordinary and were “tried and tested in so many different countries”.

He said “we’re not saying do it now”.

But he called on the Government to “send a signal” and to give a three or four year lead in to businesses so that they could prepare for the changes that were inevitable.

“This is not kicking business. It is good for business.”

Mr Ryan also hit out at companies like Coca Cola which he said in Britain “are saying they are supportive of this position (to ban single use plastics) and in Ireland are saying ‘we’re not’”.

She told Minister for Environment Richard Bruton: “You are more interested in protecting yourselves and your electoral prospects than in protecting our rivers and streams and seas and lakes.”

Mr Bruton acknowledged that Ireland’s use of 58kg of plastic per capita was 80 per cent above the EU average.

“We have chronic reliance on plastics which represents more than a quarter of all packaging waste generated.

“Our recycling level is at or about EU average which is acceptable at one level - we haven’t fallen behind - but it’s far from where we need to be.”

But the Minister said that they had to develop policy instruments to make that happen and do a proper evaluation.

The Green Party had called for the Government to advance the Bill to committee stage, where it could be debated fully but Mr Bruton said the committee was a “political arena” and did not have economic evaluations.

But he pledged to “implement a very strong range of initiatives to ensure we do meet those responsibilities we are signing up to”.

Mr Bruton said he would not delay in coming back to the Oireachtas with proposals.