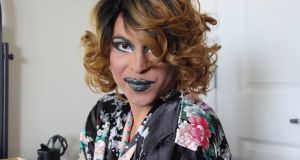 Texan Mark Samson (aka Delilah Pipes) began learning songs in Irish when he started dating a fluent Gaeilgeoir from Connemara.

A Texan drag queen who sings songs live “as Gaeilge”. A spoken-word poet whose performance mixing Irish and English riffed on the #MeToo movement. And a group of American students singing songs from the Donegal Gaeltacht.

Where else would you find them but New York?

That multifaceted, multicultural lineup - part of a recent event hosted by an Irish-language group, Gaeil Nua Eabhrac and the Irish Consulate in New York - was just one example of happenings enjoyed by the broad and thriving Irish language community in the New York area.

“When I started, it was people meeting in church basements and having a cup of tea and a slice of soda bread,” says Eibhlín Zurrell, a New York native. “Not now - it’s very vibrant. I see tons of young people and it’s not the grammar books, it’s a couple of pints and hanging out.”

As a native Irish speaker from the West Kerry Gaeltacht, who moved to New York City three years ago, I was surprised to discover a strong and vibrant Irish-language community here and in New Jersey and Connecticut, what is known as the tri-state area.

A year after my arrival, I started teaching Irish classes through the Irish Arts Center in Manhattan, for total beginners to fluent speakers.

Many want to connect to their Irish roots. Some are simply interested in languages. And others have taken a more surprising route, like Ozan Akcin, a data scientist from Turkey, who discovered the language through an interest in Irish music and the sean-nós style of singing.

“You don’t have to be Irish,” Akcin says. “It’s not an exclusive community.”

Outside the classes, I worked with Fran Mulraney, an Irish language teacher and editor of Irish Central, an Irish-American online publication, to organise a vehicle for informal gatherings to complement the formal events and lectures, and hopefully attract an even wider audience. Out of that brainstorming came our Irish-language group, Gaeil Nua Eabhrac.

Irish had always been a living language for me, from my family and my schooling to my social life and my time working as a bilingual radio and television producer and director for the BBC, TG4 and RTÉ.

Mulraney’s experience was similar. “When I lived in Dublin, I played football with Na Gaeil Óga, I worked with Raidió na Life and I also worked through Irish,” she says. “I was surrounded by young people speaking Irish the whole time.”

Inspired by a “pop-up Gaeltacht” organised by Osgur Ó Ciardha and Peadar Ó Caomhánaigh in Dublin in 2016, we wanted to create a similar event to bring Irish speakers together in an informal way.

New York’s first pop-up Gaeltacht was held in Nua Eabhrac, a bar in New York’s Midtown area, in December 2016, an informal Irish gathering where you could meet fellow Gaeilgeoirí and order your drinks “as Gaeilge”. Pop-up Gaeltachts are now regularly organised in New York.

“Whenever I take a step back and realise that our language does has a community in a place like New York, where it can be hard to establish ourselves, I feel so proud,” Mulraney says. “We are active members of the community, and we are adding to that immigrant tale in New York with our language.”

It helps that New York has strong historical links with the language. An estimated 54,000 to 75,000 Irish speakers lived in New York City between 1861 and the early 20th century; that’s around 20 to 25 per cent of the city’s Irish population at the time.

A small and steady Irish-language community has been quietly working in New York for over 35 years. In 1981, Ethel Brogan from Co Armagh organised the first Irish-language “Gaeltacht weekend” in the New York area, an immersion weekend that brought together Irish speakers and learners of the language. Through this, the nonprofit organisation Daltaí na Gaeilge (Students of Irish) was founded, and to this day, Daltaí na Gaeilge still organises classes and language immersion learning weeks throughout the year.

The group is now run by Eibhlín Zurrell, a native New Yorker whose parents hailed from Ireland, and who has been speaking and teaching Irish for over 30 years.

“When I started learning the language, one of my Irish cousins says, ‘Why don’t you learn French?’” she recalls. “Níor thuig sé! He didn’t understand why would you learn it.”

Today, the internet plays an invaluable role in keeping the flame lit.

“You meet people from Queens, Connecticut, Jersey, Brooklyn, Manhattan - everyone getting together - and it fosters a community that might not have happened without social media,” says Maureen Fleming, an events organiser from Brooklyn.

“Instead of it being something that could be quietly dorky, meeting once a week in class and reading from a book and translating, now it’s more of a living language.”

Daithí Mac Lochlainn, an Irish language teacher and activist from Queens, has been speaking the language for over 30 years. He also believes social media has changed things for the better.

“This is a modern phenomenon. It’s natural and it’s healthy for the progression of the language… The language is a bridge, not a wall.”

Such developments are to the delight of native speakers like Brian Ó Broin, a professor of medieval English literature with William Paterson University in New Jersey, who is raising his two daughters, Ána (12) and Fiona (10) with Irish.

“Identity is very important to me, and I believe that language is central to identity,” he says.

Ó Broin, who is originally from Co Galway, says he has found raising children in Irish easier in New York than in Ireland, because the local population is so tolerant of multiculturalism. “My next-door neighbours here in Bloomfield speak Swahili and Spanish,” he says.

The language is also a family affair for Mícheál Curtin, a Brooklyn native who teaches drama at the City University of New York. Since he became a fluent speaker five years ago, both his twin brother and his husband have started learning the language.

“There is a buzz happening,” Curtin says. “It feels like there is a groundswell and people coming together because of pop-up Gaeltachts and social media, and I think it is getting younger.”

A teacher in the Gaelic American Club of Fairfield in Connecticut runs an Irish class for young children. “It is not only classes that help grow the language,” says Kathleen Thopsey, a club member. “The emphasis on speaking the language in the home is also helping grow the community.”

“I don’t want to be super cheesy about it,” says self-professed “cynical New Yorker” Maureen Fleming, “but it is great to find a community of like-minded people, from all different walks of life, fluent Irish speakers and people like me who grew up in Flatbush, Brooklyn, who never heard a word of Irish except ‘Éirinn go Brách’ until she was 19 years old.”

For Séamus Ó Fianghusa, a US Army staff sergeant of Korean and Irish origin who is a fluent Irish speaker, it is vital to keep the language alive, and “the surest way to do so is raising the next generation of native speakers”.

Irish is the only language he speaks with his daughter, two-year-old Áine, whose first word was “deas” (nice). His friend and New Jersey neighbour Chris is raising his two young sons with the language, too.

For Ó Fianghusa, the movement is the start of “the Gaeltacht of the future - one that nobody in Ireland is even aware of yet! But I have a feeling you’ll be hearing a lot from them in the years to come.”