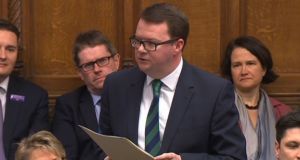 MPs have voted to give a second reading to a bill that would give same-sex couples in Northern Ireland the right to marry.

Introducing the bill in the House of Commons on Wednesday, South Armagh-born Labour MP Conor McGinn said he was doing so “with reluctance and some disappointment”.

He added: “This measure is long overdue. Northern Ireland is the anomaly on these islands when it comes to LGBT rights. My constituents in St Helens and people in London, Dublin, Cardiff and Edinburgh can all get married to the person they love.

“But same-sex couples in Northern Ireland are denied that basic right. That is wrong and it must finally be corrected,” he said.

The Northern Ireland Assembly has voted on marriage equality five times, finally approving it by 53 votes to 52 in November 2015.

However, the legislation was blocked by a DUP petition of concern.

On Tuesday, the House of Lords agreed to allow an identical bill, Robert Hayward’s Marriage (Same Sex Couples) (Northern Ireland) Bill to proceed to a First Reading, the first stage in the legislative process.

Mr McGinn said the fact that the Assembly was in cold storage should not mean that Northern Ireland “remains a cold house for LGBT rights”, adding that attitudes have changed on the island of Ireland.

Department of Education clashes with research agency over future direction 01:01
RTÉ receives complaint from union after ‘issue’ with spokeswoman’s accent 01:00
Election 2020: Fine Gael and Fianna Fáil set to reveal spending plans worth billions 01:00
Clontarf tenant says her garden was ‘destroyed’ without warning by Irish Rail 01:00
Business made payments to Fianna Fáil candidate and wife as Revenue debts rose 01:00
SUBSCRIBER ONLY