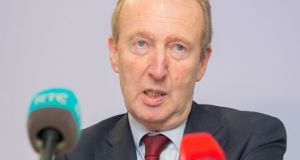 Minister for Transport Shane Ross has said the Judicial Appointments Bill was “an absolute top priority” for the Independent Alliance, and that he expected it would be passed by the summer recess.

Minister for Transport Shane Ross has said politicians are continuing to appoint “their friends” as judges, but that legislation to reform the process will be in place by the summer.

Mr Ross was responding to the controversy which arose after comments by Attorney General Séamus Woulfe, who said on Friday that the Judicial Appointments Bill – long championed by Mr Ross – was a “dog’s dinner”.

Mr Ross told RTÉ radio’s This Week programme the Bill was “an absolute top priority” for the Independent Alliance, and that he expected it would be passed by the summer recess.

He said he was “not going to be issuing ultimatums on the air”, but the passage of the Bill was “a very, very serious requirement for the Independent Alliance”.

He repeated the new Bill was necessary to change the current system of judicial appointments, which saw “politicians appointing their favourite barristers and solicitors to the bench”.

Mr Ross acknowledged there were legal questions about some aspects of the Bill following a large number of amendments at committee stage, but said he had spent the morning discussing the issue with the Attorney General (AG), and the issues that concern the AG were “going to be addressed tomorrow morning at dawn when people go in”.

“This Bill will get through in one form or another,” Mr Ross said.

Earlier, Minister for Finance Paschal Donohoe said the Government was committed to completing the passage of the Bill as it was part of the Programme for Government, but he declined to give a timetable, citing the Government’s lack of a majority in the Dáil.

He declined to endorse Mr Ross’s view of the judicial appointments procedure as a “rotten system”, but said he agreed the system needed to change.

However, the Fianna Fáil justice spokesman Jim O’Callaghan said it was “completely unacceptable” for a Government Minister to assert that people were being appointed as judges because they were friends of politicians.