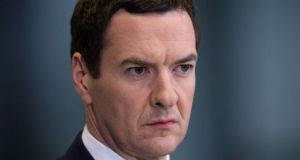 The former British chancellor of the exchequer George Osborne has said Northern Ireland is “heading for the exit door” from the United Kingdom.

Writing in the London Evening Standard, where he is now editor-in-chief, Mr Osborne said the North was “slowly becoming part of a united Ireland” and most people in England “will not care”.

The former Conservative MP wrote: “By unleashing English nationalism, Brexit has made the future of the UK the central political issue of the coming decade. Northern Ireland is already heading for the exit door.

“By remaining in the EU single market, it is for all economic intents and purposes now slowly becoming part of a united Ireland. Its prosperity now depends on its relationship with Dublin (and Brussels), not London. The politics will follow,” he wrote on Tuesday.

Mr Osborne said unionists in Northern Ireland had always feared Britain was not sufficiently committed to their cause.

“Now their short-sighted support for Brexit (and unbelievably stupid decision to torpedo Theresa May’s deal that avoided separate Irish arrangements) has made those fears a reality. It pains me to report that most here and abroad will not care.”

The departure of Scotland from the UK would be a more serious matter, he implies, and it would represent the end of the United Kingdom “with no disrespect to the Welsh”.

He said the worst evening he spent in Downing Street was on September 18th, 2014, awaiting the results of the Scottish independence referendum with then prime minister David Cameron.

“We thought: are we the people who have lost Scotland? History allows for no recovery from a disaster like that. Ask Lord North, the prime minister condemned for all time for the loss of America.

“The mistake he made — and with Irish calls for home rule a century later — had been to assume that doing nothing was an option. Our referendum was a proactive plan to keep the United Kingdom together — and it looked like it had put Scottish nationalism back in its box for a generation.”

But Brexit, and its unleashing of English nationalism, had ensured this was no longer the case, he said.

Mr Osborne said those who want to keep the UK together need to respond with new, powerful arguments against separation. “After all, hasn’t the EU negotiations shown Scots that the whip hand lies with the larger, more powerful bloc?”

“It’s the only sure way you won’t lose one,” he added.

“Just say no, Boris, and save yourself a long anxious night in Downing Street.”