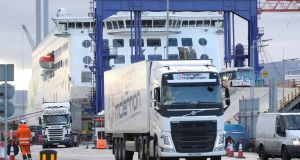 Freight trucks at Dublin Port. The Department of Transport suggested that some companies had been insufficiently prepared for complexities when exporting products to Ireland. Photograph: Sasko Lazarov/RollingNews.ie

Officials working with Revenue and several government departments have said supply chain issues in the Irish retail sector since the new year are a result of “blockages” in Britain and a failure of importers to sufficiently prepare for Brexit.

However, representatives of the Departments of Enterprise and Transport stressed they had been assured by supermarkets that stocks were holding up, with no significant shortages anticipated in the weeks ahead.

Speaking at a briefing on Brexit issues at Dublin Port on Monday afternoon, Eddie Burke of the Department of Transport noted “difficulties” on the British side in recent weeks, and suggested that some companies there had been insufficiently prepared for complexities when exporting products to Ireland.

“I am not saying there are no problems – there are blockages,” he admitted, adding that they had not caused any significant shortages since the start of the year,

He said all relevant agencies on this side of the Irish Sea would remain committed to working with businesses to resolve issues that were likely to arise.

However, he warned that Brexit inevitably meant processes would remain more complex with enhanced customs requirements no matter what steps were taken to ensure a smoother flow of trade in the months ahead.

Declan Hughes of the Department of Enterprise, Trade and Employment, said he had been assured by retailers as recently as the weekend just past that the supply chains in the Republic were solid, and he commended them for sustaining a continuity of supply since the start of the year.

“This last couple of days was again an improvement on the previous weekend, and product is coming through,” he said, adding that there had been “isolated issues with particular products but in overall terms at this stage we are not being appraised of significant issues”.

Tom Talbot, of Revenue’s customs operations at Dublin Port, said that over a 24-hour period up to 8am on Sunday, 81 per cent of the goods coming through the port had been “green routed” and not needed any additional checks after arriving.

Less than a week ago the percentage was 70 per cent, and less than 50 per cent at the beginning of the year.

However, Mr Talbot said freight volumes from Britain were only 50 per cent of the same period last year, something he attributed to pre-Brexit stockpiling and Covid-19 restrictions.

He said volumes would most likely increase in the weeks ahead, but said the port had contingencies in place and he did not anticipate any difficulties with higher volumes of trade.

Addressing suggestions from importers that the requirements for an ENS number, a safety and security entry summary declaration needed for moving goods on roll-on, roll-off lorries and other goods vehicles, had caught them off guard he accepted that some did not seem to understand the requirements in the early days of this year.

He suggested that resolving issues related to the declaration would not prove overly complex for businesses.

Sources working in the retail sector have, however, said the safety and security declarations could prove to be extremely difficult, particularly if multiple food items are being imported in a single container.