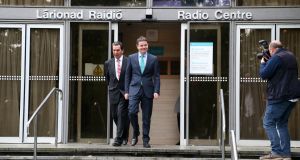 At least Leo got a break on Wednesday: a nice few hours of downtime in the Dáil doing the bread and butter stuff such as answering questions and needling the Shinners and reading out a speech.

Poor Paschal Donohoe didn’t have a minute, shuttling from studio to studio, his every move lovingly captured on camera for dissemination via social media.

Merrionstreet.ie, the “Irish Government News Service”, was on the case. We particularly loved the looping clip of the Minister for Finance walking briskly towards a flight of steps and then walking up them. All on his own.

“Arriving for the Sean O’Rourke phone-in show,” read the caption. We could have watched this scene forever. Fascinating.

But there’s more. Like the back of Paschal’s head as he puts on an oversized pair of headphones. “Ready to go on air,” the nation is told. “About to go on Sean O’Rourke phone-in show.”

A person could suffocate under such levels of excitement.

You couldn’t switch on a television, tune in a radio or open a laptop on budget day without seeing a Taoiseach or senior Government Minister. Wednesday wasn’t much better.

Not for the first time, the Taoiseach took to critiquing the acting ability of a political rival

And in a related development, we hear journalists in the Communicorp chain of radio stations have written a letter to Denis O’Brien imploring him to rescind the group’s blanket ban on Irish Times talking heads and replace it with an all-out ban on Varadkar, Donohoe and the rest of the Government Buildings crew.

“Fintan was only on now and again. We feel like Leo and his cabinet buddies are stalking us. It’s intolerable,” said one.

Depending on media requirements, the dynamic duo can work separately or as a pair. Take Wednesday night, for example, when Leo and Paschal teamed up again to do a Q and A session on Facebook for people who have nothing better to do with their lives on a Wednesday night.

The same goes for their audience.

Earlier in the day, during Leaders’ Questions, there was a lot of talk about communications, the media and performance quality.

Not for the first time, the Taoiseach took to critiquing the acting ability of a political rival. He did it a couple of weeks ago when praising Mary Lou McDonald on her excellent delivery of her script. On Wednesday, he decided to review Micheál Martin’s routine.

The Fianna Fáil leader was riffing on the theme of Brexit. Regular Dáil-goers would have guessed this in advance because Stephen Donnelly, the party’s Brexit spokesman, was in the seat next to him, playing the role of sidekick.

“But Micheál, what is my motivation?” he probably asked on the way in.

Micheál became very exercised over what he believed was the Government’s suppression of a Revenue Commissioners’ report on what a post-Brexit hard border would mean for Ireland. Why was this information not shared with the Opposition and the many thousands of businesses which will be affected?

But the Taoiseach felt the Fianna Fáil leader was overreacting. The report was written in 2015, before the Brexit referendum. Since then, said Varadkar, people have been well aware of the consequences of a hard Brexit, although the Government is fighting “tooth and nail” to prevent it happening. He had no problem publishing the report.

But Micheál Martin was convinced the Government was hiding something. “Stop being disingenuous that this is no surprise,” he thundered.

The Dáil’s chief drama critic agreed. “I have to say I’m a little disturbed by this level of outrage because it doesn’t seem to be genuine to me,” pronounced Leo.

Next onto the fake news bandwagon was Gerry Adams, who attacked Tuesday’s budget as “lacking in vision and devoid of ambition”. The Minister for Finance had disregarded Sinn Féin’s range of progressive proposals for health services.

But Varadkar, who was in fighting form and clearly buoyed up after budget day, produced a copy of their healthcare proposals and proceeded to rubbish the figures therein.

Anyway, as far as Adams is concerned, what the Government produced was a “fake budget”.

This communications thing is getting out of hand.

Micheál Martin certainly thinks so. He couldn’t wait to get around to the issue of the Government’s new Strategic Communications Unit which was allocated €5 million in the budget. In the interest of transparency, the Taoiseach wanted that figure made public so it didn’t take away from the fact that the unit is actually “cost-neutral”.

The Strat Comms elite are not to be confused with the Merrion Streeters, who afford “a view of government from the vantage point of Government Buildings itself”. They “bring together on one website a view of Government not previously available . . . review the wide range of Government activity and then report certain key events as news.”

The people in the new unit will doing something similar, but deep-drilling from a holistic communications platform where the synergies tapped from multi-operational veins can be harnessed on a macro level to increase stakeholder awareness of why Fine Gael must be returned with an overall majority.

The unit has a happening new boss who created such marketing successes as the Wild Atlantic Way, The Gathering and Creative Ireland.

His name is John Concannon and, in what was a huge stroke of luck for Leo Varadkar and his Government’s image, the media whizz was selected by the head of the Civil Service (where canvassing disqualifies) to run it.

Such a serendipitous turn of events.

Because Leo, who has great admiration for John, had approached him and wondered if he might be interested in taking the communications job. Then all of sudden, didn’t the general secretary of his department offer John the job anyway?

“I didn’t appoint him,” said the Taoiseach yesterday.

“I think you’re being a bit disingenuous,” reckoned Micheál, understandably.

“You’re welcome to believe what you want to believe,” huffed Leo. He accused the Fianna Fáil leader of “spinning” the story and then tripped himself up in his own spin.