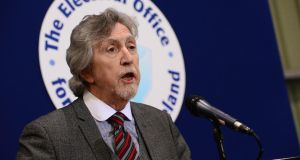 Mickey Brady of Sinn Féin saw his majority drop from more than 12,000 in 2017 to just over 9,000 this time around, but his victory was never in doubt. Photograph: Arthur Allison/Pacemaker Press

Newry and Armagh was a comfortable win for Mickey Brady of Sinn Féin, the constituency’s MP since 2015. It has been in Sinn Féin hands since 2005; this Border constituency, with a large Sinn Féin majority, was always going to be a safe seat for Brady.

This was an election that saw the share of the vote of the two largest parties, the DUP and Sinn Féin, fall significantly, by 5.4 and 6.7 percentage points respectively, and the result here followed the pattern across Northern Ireland.

Although returned with a reduced majority – from more than 12,000 in 2017 to just over 9,000 this time around – the result was never in doubt. It demonstrated, Brady said, that Irish unity was no longer just an aspiration; many in this strongly pro-Remain constituency would agree.

Speaking from the podium as he was re-elected, Brady said Brexit was a “nonrunner” and the time had come for a united Ireland. “Newry and Armagh has spoken, Brexit has been rejected,” he said. “The Remain parties are in the ascendancy. Brexit, as far as we’re concerned, is a nonrunner.

“And as far as I am concerned I will work very, very hard to ensure that the people of Newry and Armagh constituency have a bright and positive future, and indeed all the people of this island. Unity is no longer an aspiration: it is a project.”

Labour vows to slash the cost of childcare by up to two thirds 12:31
Judge finds nothing to ‘preclude’ surrender of man wanted over Essex lorry deaths 11:55
Apartment owner who paid €16,000 for defects will not ‘fix it quietly and go away’ 11:30
Fatal stabbing of young pony in Co Longford ‘a new low’ 11:28
Fianna Fáil promises €10m redress fund for Celtic Tiger building defects 10:59
SUBSCRIBER ONLY