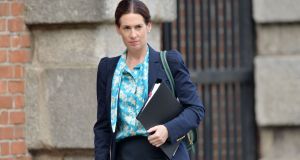 The company that runs Dublin and Cork airports, DAA is exploring options for Covid-19 testing in line with proposed EU common travel and restriction rules, Minister of State for Transport Hildegarde Naughton has said.

She told Independent TD Matt Shanahan that the authority was examining the issue and assessing “possible business and public health impacts under different scenarios”.

Mr Shanahan said the sector was in crisis and he could not understand why the authorities were not looking at the possibility of using short turnaround tests such as antigen testing which provided a result within 20 minutes.

But the Minister warned that “one of the big concerns is that whatever testing regime is put in place that it doesn’t impact on our own public health testing capacity within the country".

“Getting international travel back up is absolutely essential and it’s critical that we do it in a safe way.”

She stressed that in implementing proposal for pre-departure or on-arrival testing arrangements they had to ensure that it does “not impact on testing and tracing of symptomatic patients, of serial testing of high risk groups or workplace environments”.

During transport questions in the Dáil the Waterford TD said he had raised the issue of antigen testing at the Oireachtas Covid-19 committee and it could be looked at “rather than waiting for Europe to come up with possible opportunities”.

He added that there were higher strictures on aviation in Ireland than elsewhere, Brexit was coming down the tracks and businesses were going to need to markets and to travel to make those connections.

“We are not on a lot of countries’ green lists and we’re not going to get there” without action in the community. But he said “I would like to see more priority given to testing and quick turnaround tests.”

She met DAA chief executive Dalton Philips on Wednesday and their explorations were modelled on testing in line with the “possible new approach to international travel requirements” in the proposed European co-ordinated approach.

A decision on the common approach proposed by the European Commission will be made at the earliest on October 13th when it will be discussed at the European general affairs meeting.

The commission proposal is to promote a common approach to travel restrictions and movement within the EU including common criteria and thresholds for restrictions on free movement; a green, amber and red colour system; agreed approach travel to and from higher risk areas; and the provision of comprehensive and timely information about any restrictions.