Appearance of Minister, NPHET and HSE cancelled 24 hours before meeting 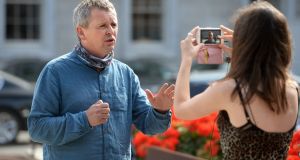 Richard Boyd Barrett during a media conference at Leinster House on Tuesday. The TD accused the Minister for Health of running away from accountability. Photograph: Dara Mac Dónaill

There were heated exchanges in the Dáil after it emerged that the attendance of the Minister for Health, NPHET (National Public Health Emergency Team) and HSE at the Oireachtas Covid-19 committee was cancelled just 24 hours before it was due to meet.

A row erupted about a debate on the public health regulations introduced last Friday. It lasted for more than an hour and sparked two Dáil votes as the Opposition objected to the Dáil’s agenda for Tuesday and Wednesday.

People Before Profit TD Richard Boyd Barrett accused Minister for Health Stephen Donnelly of “running away” from accountability to the House.

Taoiseach Micheál Martin said the Government wanted to complete and launch the HSE winter plan for the health service this week and the Minister, HSE and NPHET would attend the committee next Wednesday.

Mr Boyd Barrett claimed Mr Donnelly said he was not coming in to the committee because “the new restrictions are not his” but were the responsibility of the whole of Government.

He added that the winter plan was now being used as an excuse not to debate the regulations or the testing and tracing strategy.

Sinn Féin whip Pádraig Mac Lochlainn accused the Taoiseach of denying the Opposition the right to scrutinise and debate the public health regulations when the Northern Ireland Assembly was doing that and “making them accountable to the public”.

Sinn Féin health spokesman David Cullinane said they only got notice on Tuesday of the postponement of the Minister’s session of Wednesday’s meeting and that was unacceptable.

Ceann Comhairle Seán Ó Fearghaíl pointed out that “when we established the Covid-19 committee, a core principle was that we were all committed not to take any professional away from the front-line services in order to serve the committees”. Everyone had signed up to that, Mr Ó Fearghaíl said.

He said the immediate priority was to finalise and launch the HSE winter plan and the Dáil could sit on Friday to debate the regulations if the Opposition wanted.

He told Sinn Féin however that “my suspicion is that you want to undermine the regulations not support them” and that the testing and tracing system had been debate in the Dáil. He accused the party of using “every excuse” to play politics.

The Taoiseach said the system was robust compared to other countries and to describe it as “woeful” as Sinn Féin had done was “desperately unfair to frontline workers who are testing and tracing across the country and doing it well”.

He said that no matter what was decided by the Dáil business committee, which agrees in advance the weekly agenda, there was a vote every Tuesday on the House’s weekly business.

Labour TD Duncan Smith said however he believed the Taoiseach would accept that “three sets of witnesses pulling out of three sessions the day before the scheduled committee is pretty damaging and unprecedented for any committee”.

1 One hundred Irish retailers for all your online Christmas shopping
2 Covid-19: Backlog forces HSE to skip calls to thousands of close contacts
3 Suzanne Lynch’s US Election Diary: Trump ‘walks out’ of TV interview at White House
4 ‘Groundbreaking’ direct provision replacement forecast to save millions
5 Covid-19 Explainer: Why is the contact tracing system getting swamped?
Real news has value SUBSCRIBE