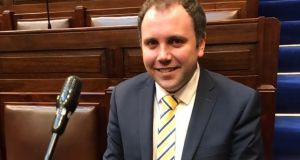 Clare TD Cathal Crowe said ‘our country has one army and one army only’ during a Dáil debate.

A call has been made for the Government to consider banning the wearing of paramilitary uniforms by dissidents.

Fianna Fáil TD Cathal Crowe said: “the men and women who wear sunglasses and black berets, and these green jumpers and combat boots on our streets dishonour our permanent Defence Forces”.

The Clare TD said “our country has one army and one army only. They wear the national uniform of our Defence Forces with pride and dignity.”

He said that “as we progress through the decade of centenary commemorations the Government should look at outlawing fully the wearing of paramilitary uniforms on our streets by dissidents”.

The Government backbencher said that such displays by dissidents dishonour journalist Lyra McKee who was shot dead during rioting last year in Derry and “the many people who have been victims of republican paramilitarism”.

Mr Crowe was speaking during the ongoing debate on legislation to give effect to the fifth European directive preventing the use of the financial system for money laundering or terrorist financing.

“The movement of money is not now solely restricted to concealing or redirecting hard cash but is much more sophisticated and we must, in many ways, try to get as far ahead of it as possible,” Ms Murphy said.

The Kildare North TD said Ireland and Romania were the last two EU member states to transpose the four money laundering directive into law and the State was fined €2 million for the delay.

Ms Murphy said the State’s failure was described at the time as posing a risk to the integrity of the functioning of the EU financial system, “making it vulnerable to money laundering and terrorist financing and affecting investors and citizens. “It is vital that we act expeditiously to close compliance gaps.”

Sinn Féin’s Ruairí Ó Murchú said “we cannot leave inconsistencies and weaknesses open for criminals because criminality is constantly evolving and we need to ensure that our capacity to fight it also evolves.”

He highlighted drugs criminality and said that it was “one of the ultimate cash businesses that still remains.

“We need to ensure that we have forensic computing and accounting capacity and that all legal loopholes are closed.”