Any move towards lockdown has potential to destroy morale of people, says TD 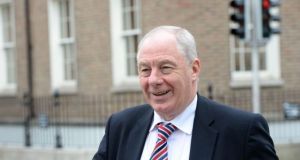 A senior Government TD and former minister has strongly disputed the National Public Health Emergency Team’s (Nphet) advice to elevate to Level 5 of the Covid-19 alert plan, portraying it as a “cruel, cruel” move.

Former minister for rural affairs, Michael Ring, in a vehement criticism, said he was opposed to any move towards lockdown because it had the potential to destroy the morale of people. He said he was personally in favour of moving most of the State back to Level 2.

He said Nphet had a responsibility towards other aspects of public health and well-being, in addition to its response to the pandemic.

“The Government is handling this badly now. We have to make political decisions as well as medical decisions,” he contended.

“My recommendation is we should go back again to Level 2 where at least we have a bit of normality.”

“People need normality in their lives. We are all depressed. Everybody is depressed. This was bad enough in the summer when there was fine weather and they could do gardens and so on.

“But coming into the winter, from next week on, [the clocks change] and it’s going to be dark at 4 o’clock and it won’t brighten up again until ten in the morning and if there is rain you will have no brightness at all.

“It’s not going to be good for the wellbeing of people’s mental health.”

‘Economical with the truth’

“[The authorities] have to make decisions. They need to tell us where the community outbreaks are now, and why are they happening?

“If they are doing the contact tracing they should be well able to tell us that. They are being economical with the truth,” he claimed.

Mr Ring is one of a number of TDs and Senators who have questioned the rationale of the State moving to similar restrictions that pertained during the first surge of the coronavirus pandemic in March and April.

Fine Gael TD Alan Farrell criticised Nphet for leaking its advice to the media ahead of advising the Cabinet.

“It appears that NPHET are briefing the media again ahead of its primary function of advising Cabinet causing speculation and worry,” he posted on his Twitter account.

“If this leaking continues, questions must be asked as to whether or not the body is fit for purpose in its current form,” he added.

Fianna Fáil TD Jim O’Callaghan also questioned the wisdom of the State returning to an effective lockdown for a second time.