TD says support system has fallen down despite assurances from Taoiseach 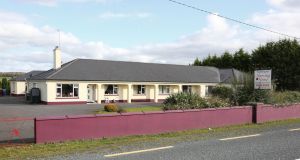 The HSE supplied one nurse and one care attendant to the Nightingale nursing home yesterday afternoon to support staff drafted in from Roscommon University Hospital, along with volunteers. Photograph: Joe O’Shaughnessy

Emergency staff have been drafted into a nursing home in Ahascragh, Co Galway, following a Covid-19 outbreak that has affected all but four of the home’s staff and 26 out of the 28 residents.

The Health Service Executive supplied one nurse and one care attendant to the Nightingale nursing home yesterday afternoon to support staff drafted in from Roscommon University Hospital, along with volunteers.

The extra staff mean that the nursing home, which saw one nurse and one care worker doing 13-hour shifts to care for patients before the crisis became public, now has cover for the coming days,

“This should never, ever, ever have come to something like this. This should never have needed to be brought to my attention. Something has fallen down for this to happen,” declared Independent Roscommon-Galway TD Denis Naughten.

“The system has fallen down despite numerous reassurances from the Taoiseach. The Taoiseach provided reassurances in the Dáil yesterday. He was providing reassurances as this was taking place in this nursing home,” he told the Irish Times.

One resident was admitted on Monday to Portiuncula Hospital in Ballinasloe with Covid-19. Subsequently the entire nursing home was tested on Monday. Twenty five of the 27 patients were found to be positive. All but four staff were positive, too.

Director of nursing at the home, Patricia MacGabhann, who herself has tested positive for Covid-19, said she begged for help from the Health Service Executive as staff were withdrawn from duty.

One person has passed away. Two other residents were taken to hospital yesterday, she told The Irish Times, adding that the HSE had promised to send two carers yesterday, but “nobody showed up”.

“Those two girls down there are just running on adrenaline,” Ms MacGabhann said, “I have no solid symptoms, I am not sick. I would go down there to help except that I am not allowed to do so.”

The residents are “citizens of this country and the State has an obligation to look after them. They [the HSE] are not giving us the help. They kept batting it back to us saying: ‘Go and find agency staff.’ But we cannot get any,” she declared.

Local Ballygar GP Martin Daly said the Nightingale had faced an “absolute emergency” and needs HSE support until the staff currently self-isolating under Covid-19 rules are able to return to work.

“It is absolutely dreadful . . . I am completely and utterly taken aback that a nursing home providing care to vulnerable elderly people with multiple co-morbidities has been unable to secure emergency help from the HSE,” he added.

The Nightingale has not had a Covid-19 case before now, said Ms MacGabhann: “We kept it out for so long, but this just happened. It is a virus. And when it did happen we got no help. Nobody cares, that is how we feel,” she said.

Some residents have been in the nursing home for a decade: “I really thought that services work together for the good of the people . . . This feels like because we are private we have to fend for ourselves,” she said.

Contacted by a nurse

Dr Daly, who acts as the general practitioner to a third of the Nightingale’s residents, said he had been contacted by a nurse from the home on Thursday morning who was “extremely upset and desperate”.

“A nursing home resident was admitted last Thursday into hospital for a non-Covid illness it would appear, tested positive for Covid. Then the whole nursing home, which was the 28 residents and all the staff were tested,” he told The Irish Times on Thursday.

Dr Daly said he had contacted the HSE, as had Mr Naughten, who said the HSE had told him that there was no prospect of relief for the nursing home.

“That’s not good enough,” Dr Daly later told RTÉ radio’s Today with Claire Byrne show. “The building is burning. They need to react. These are vulnerable, elderly patients. They deserve every chance to be looked after in their hour of need.”