Government warned failure to impose lockdown would see around 1,000 cases a day 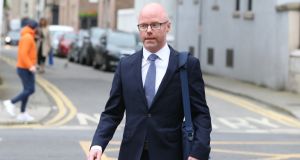 Minister for Health Stephen Donnelly was told that the rate of growth in the country was 5-6 per cent, meaning new cases would double every 12-14 days. Photograph: Stephen Collins/Collins Photos Dublin

A full six-week lockdown would mean new cases of around 50-100 per day as the Christmas season starts, the National Public Emergency Team (Nphet) told Government in its letter last week.

However, failure to impose a full six-week lockdown would mean around 1,000 cases a day could still be expected in the middle of December, the Government was warned by Nphet last week.

A six-week lockdown would result in cases falling to 50-100 per day by the end of the period and not return to a level above 300 per day until early January.

While it is not explicit, the warning makes clear that failing to enforce a full lockdown for six weeks would mean the disease would effectively be out of control over Christmas.

The warning is contained in the Nphet letter to Government from October 15th, which has been seen by The Irish Times.

It states that were the R number brought down to 0.5 for a period of three weeks, case numbers would drop to between 250 and 300 cases per day by the end of that period.

However, it says modelling estimates that easing measures at that point, with the R number returning to 1.4, would “very likely result in a rapid re-escalation in disease trajectory and impact, such that approximately one thousand cases per day would be expected by the middle of December 2020”.

Contrastingly, if R could be brought to 0.5 for six weeks, case numbers would fall to between 50 and 100 cases per day by the end of that period - which will coincide with the start of December.

Following that, a release of measures and return to an R of 1.4 “would be expected to result in cases not going above 300 cases per day until early January 2021”.

Among the key points noted by Nphet in the letter, sent on October 15th, was an 82 per cent increase in the number of cases in the seven days up to October 15th when compared with the previous seven days.

The five-day average also increased to 946 from 508, while the positivity rate increased from 4 per cent to 6 per cent across the previous week, and was 7.9 per cent the day before the letter was sent.

Increasing levels of disease among the older cohorts were also flagged, with the 14-day incidence in those aged 65 years and older increasing from 92.9 per 100,000 to 125 on the day before the letter was sent.

Rising number in hospital and critical care were flagged, and Minister for Health Stephen Donnelly was told the rate of growth in the country was 5-6 per cent, meaning new cases would double every 12-14 days.

Increasing deaths and clusters, and the presence of 21 clusters in acute hospitals. In the week to Saturday 10th October, there were 12 new clusters notified in nursing homes, with 130 linked cases.

The letter also suggested that people were paying less attention to restrictions, citing mobility data showed that “the impact of current measures has been much less pronounced than in the earlier phases of the pandemic”.

It warned that the R number for the country is was 1.4, but this was flattered by Dublin, where it is 1.0. In the rest of the country, it was closer to 1.6, the letter warned.

It said modelling showed that were current trends to continue, between 1,800 and 2,500 cases would be notified per day by the end of the month. It also warned that for every 1,000 confirmed cases, there would be 30-40 hospitalisations, with 4-5 people admitted to critical care, and 3-4 deaths.

Nphet reiterated its “deep and escalating concern” in relation to the situation, and said that since its 4th October letter, there had been a “further significant deterioration in all key indicators of disease transmission” and there is “widespread community transmission” across the country.

The growth rate of the epidemic has accelerated, the letter warns, “compromising our ability to protect” core priorities – including disruption to non-Covid health and social care services, protecting vulnerable people, and keeping children in childcare and education.

The letter “expressed its concern in relation to health system capacity” entering into the winter period, “which has traditionally been the most challenging for the system”.

“Current levels of transmission are already challenging our testing and public health capacity.”

It said that Nphet noted “the very real risk that hospitals in particular will have difficulties in meeting demand in the coming days and weeks”.

It said Nphet believed that measures in place in Donegal and Dublin “have not had sufficient impact to date”, and while noting the decision from last week to introduce harsher measures, it said it “continues to believe that a more aggressive strategy is necessary”, which it said would allow the country to get to a point “where restrictions can be lifted more quickly.”

“The risk is too great to wait to take further action,” the letter states, adding that Level five was “warranted” especially due to the impact of the stay at home measures, which could be especially valuable if appropriately adhered to.

It said all the triggers for moving to Level 5 had been met.

“There is high and rapidly increasing disease incidence with all indicators of viral transmission escalating rapidly . . . multiple clusters with secondary and tertiary spread and cases in residential care settings are increasing rapidly”.

It wrote that the “capacity to undertake robust and timely contact tracing is now constrained” while mortality was also increasing.

“Nphet firmly believes that an escalation to Level 5 is inevitable and that the earlier this proactive action is taken, the greater chance there is of quickly reversing the current trajectory,” the letter states.

It noted “how difficult it will be for everyone to return to this level of restrictions” but said it is confident “that people across Ireland can once again meet this challenge with determination and unity of purpose”.

It urged further investment in the public health response system to ensure the pandemic can be managed. Nphet also “noted that consideration of the future response strategy for the period following this wave of infection is needed and that it will consider this matter further in the coming weeks.”