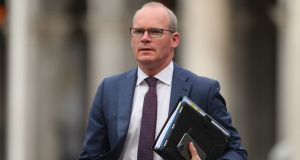 Minister for Foreign Affairs Simon Coveney: urged businesses to prepare for Brexit, saying they should see the €3.4 billion of “scarce taxpayers’ money” the Government has earmarked for economic recovery post-Brexit as a sign that it sees the possibility of a “no trade deal Brexit” as a “very real risk”. Photograph: Niall Carson/PA

Striking a trade deal between the EU and the UK before the end of the transition period in 70 days is “doable but difficult”, Minister for Foreign Affairs Simon Coveney has said.

The EU and UK resumed talks on Thursday in an intensified final push to find a post-Brexit trade deal to prevent trade defaulting to costly tariffs under World Trade Organisation rules.

“The pressure is on. We’re running out of time,” Mr Coveney said.

Failing to reach a deal would be “an extraordinary failure of politics and diplomacy”, he said, and warned that the consequences would “reverberate for years”.

“What we have now is a much more intense period of negotiation in an effort to try to find middle-ground positions that both sides can accept,” he said.

Mr Coveney said that a “very thin, basic trade deal” could avoid tariffs and quotas on EU-UK trade and would make other issues the two are grappling with – state aid and the risk of goods “leaking into the EU single market through Northern Ireland” – easier to resolve.

The alternative to a deal would be “increased disruption, more acrimony and an unnecessary breakdown of relationships between the EU and the UK”, he said.

The Minister urged businesses to prepare for Brexit, saying they should see the €3.4 billion of “scarce taxpayers’ money” the Government has earmarked for economic recovery post-Brexit as a sign that it sees the possibility of a “no trade deal Brexit” as a “very real risk”.

“There is no opportunity for more time. This will come to a head one way or another,” he said.

He cautioned people not to assume that just because negotiations had resumed at an intensified level that the major outstanding issues had gone away and a deal would be agreed.

“Fishing is still a really, really difficult issue to resolve and both sides are miles apart,” he said.

Divisions over the “level playing field” issue – a trade-policy term for a set of common rules that prevent businesses in one country gaining competitive advantage over those in other countries – was “not an easy issue to resolve,” said Mr Coveney.

The EU “will never sign up” to a trade deal that allows the UK to “deregulate its economy to use state aid to competitive advantage” for British companies over EU companies while permitting British companies to trade into the EU single market tariff-free and quota-free, he said.

The Minister said that if there was an agreement on this outstanding issue, it would not be called “a level playing field” because it had become “a toxic term in British politics”.

“The British government needs to understand that while they have political challenges to finalise a deal in terms of domestic British politics, the EU also has very legitimate concerns here that have got to be accommodated if there is going to be a deal,” he said.

The Government expects the UK government to deliver on its commitment in the already-agreed Northern Ireland protocol that avoids a hard border on the island of Ireland to start building infrastructure for checks at airports and ports on the Irish Sea, he said.

He said EU and UK negotiators were trying to address UK government concerns on export declarations on goods moving between Northern Ireland and Britain under the protocol.

Mr Coveney said he would like to see country-of-origin rules applied to dairy and agri-food goods produced in Northern Ireland and in cross-Border supply chains so that they would benefit from EU trade deals but he did not believe the issue would be resolved before the end of the year.