Much heat but little light in pursuit of Brexit deal 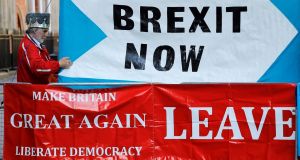 British prime minister Boris Johnson has been told by EU leaders proposals must achieve the same effect as the backstop contained in the withdrawal treaty. Photograph: Getty

On Friday it will be 30 days since German chancellor Angela Merkel told Boris Johnson during a Berlin news conference that a solution to the Brexit impasse could maybe be found within 30 days.

Johnson, seizing on her remarks, welcomed the “blistering timetable” and declared “Wir schaffen das” (“We will manage”) a “Yes we can!” type phrase previously used by Merkel about the refugee crisis.

And off he went. On that swing through European capitals, Johnson seemed to impress Merkel and later French president Emmanuel Macron with his desire to agree a new deal with the EU. Last week, he did the same with Taoiseach Leo Varadkar.

But what Merkel and Macron, Varadkar and Jean Claude Juncker (don’t mention Xavier Bettel) and every other EU leader to whom he has spoken have said to Johnson is that those proposals must achieve the same effect as the backstop contained in the withdrawal treaty.

But 29 days on, there has been no sign of British proposals which do anything of the sort. As EU leaders note with increasing irritation, nothing concrete has been tabled by the British government which could serve as a basis for negotiations with the EU.

Neither have the British tabled workable solutions in the technical discussions that continue between Downing Street officials and the European Commission – meetings that Johnson now wants to intensify so that they take place every day. While Brussels sources wonder for what?

But several senior Irish sources are clear as a whistle on these ideas and concepts: none of them go remotely far enough towards establishing a workable alternative to the backstop. In other words, not alone are there no negotiations on a new deal going on, we are quite a distance away from the starting point for such negotiations.

Speculation as to whether Johnson is serious about wanting a deal comes and goes in Dublin and in Brussels. Some politicians and officials expect British proposals to replace the backstop to be tabled late in the day, with a frantic period of negotiating against the deadline of a no-deal Brexit looming. Others say this is all just part of a strategy to avoid the blame for no deal.

What, if anything, is taking shape?

Johnson has claimed the shape of a deal is becoming clearer. And despite protestations it appears that if there is to be a deal it will be a Northern Ireland-specific solution that involves treating the North differently from the rest of the UK, in some respects.

There may be a role for Stormont to give it democratic legitimacy in Northern Ireland. It will include an all-Ireland food and agriculture zone (eliminating the requirement for animals to be checked on the Border) and a series of measures such as a trusted-trader scheme, checks on goods at a business level and other arrangements designed to reduce cross-Border friction.

However, senior Irish sources familiar with Government deliberations say that even if the details of these measures were worked out – and they are not – they would be insufficient to replace the backstop.

That is because the position of Theresa May’s government – that it would eliminate the need for a border – has been junked by Johnson and replaced with a commitment to try to make the Border as frictionless as possible. That is a very big difference. And it will make a deal very difficult to reach.

The mood in Dublin is growing more pessimistic.