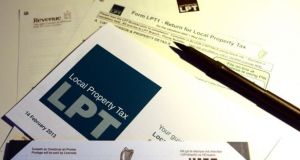 The report is said to outline a number of proposed options for dealing with the tax, from cutting the rate to widening the bands. 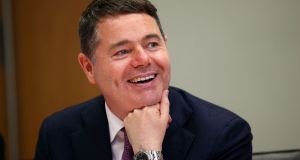 Minister for Finance Paschal Donohoe is due to appear before the Oireachtas Committee of Budgetary Oversight on Tuesday. Photograph: Laura Hutton/The Irish Times

The Minister for Finance Paschal Donohoe is planning for “modest” increases in property tax when the deadline for re-evaluating how much householders pay comes around next year.

Mr Donohoe said any changes would be “affordable” but the “progressivity” of the tax would be upheld.

He is due to appear before the Oireachtas Committee of Budgetary Oversight on Tuesday where he will also state that any future reforms of the local property tax will need to be based on a model of band widening and changes to the rates that are applied.

A freeze on re-evaluations until November 2020 was announced earlier this year.

Mr Donohoe is due to tell committee members that he is of the “firm belief” that there is “latent potential for the tax to play a more significant and positive role in our overall taxation system”.

He will outline how it is “important that the future of the tax is secured so as to maintain the possibility of enhancing and enlarging on its contribution as a proportion of overall tax revenues and bringing it up to European norms in that regard”.

The Government took in just over €480 million from the property tax last year.

In his opening statement to the committee, which has been seen by The Irish Times, Mr Donohoe says he aims to protect that yield. He will also aim to integrate new properties into the local property tax base and will indicate a willingness to look into different rates for those who already pay property management fees.

“I have indicated my willingness to engage with the committee on the issue of taxpayers whose property is located in a managed estate on which the owner of the property is liable to the payment of management fees,” he will say.

He is also expected to outline his support for the “retention of the option for local authorities to reduce the LPT rate for their area”.

Each local authority has the ability to adjust their rate to within 15 per cent of the national rate.

Mr Donohoe’s comments come as Dublin City Council has agreed to let each party or independent councillor put forward their own plan for potential changes to the 15 per cent discount currently given to homeowners. Any change to the current system of giving the full discount would mean a potential increase in property tax bills for homeowners in Dublin. A vote on the issue will be held in September, it has been decided.

The new lord mayor, Fianna Fáil’s Paul McAuliffe, said some parties had raised the possibility of not passing on the full discount. “Any attempt not to pass that on would result in a net increase in property tax prices. We have agreed that each party will formulate their own position and at the September meeting those variations will be put forward.” A vote would be held in time for the October budget, he said.

At the committee meeting on Tuesday afternoon, Mr Donohoe will say he hopes to achieve a consensus as to the future direction of the local property tax.

The rate of property tax paid by homeowners is based on the value of the property in May 2013.

However, in 2015 then minister for finance Michael Noonan announced the valuation thresholds for LPT would be frozen until October 2019, meaning households paying the tax would not see an increase in their bill until then.

In April the Government decided to postpone making a decision on the future of the tax until next year.