‘We need to take the heat out of this discussion’, says Tánaiste 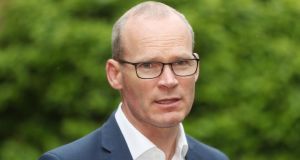 Tánaiste Simon Coveney: ‘I think the less we talk about boardings and potential clashes the better.’ Photograph: Niall Carson/PA Wire

Tánaiste and Minister for Foreign Affairs Simon Coveney has ruled out sending Naval Service vessels into the waters around Rockall.

Mr Coveney said “we need to take the heat out of this discussion” and that “diplomatic channels” are open between both the Irish and Scottish Governments.

Speaking in Cork on Monday, Mr Coveney said: “There is no question of sending in naval ships. I think the less we talk about boardings and potential clashes the better.

“We need to take the heat out of this discussion and look for solutions. That is what diplomacy is about. Scotland and Ireland are very close friends. We will work with them to try to bring an end to this.

“But what we won’t do is change a policy that we have had in place for decades on the back of a threat which is what has been happening for the last few days.”

Government officials were in contact with their Scottish counterparts on Sunday in an attempt to ease tensions in the dispute over fishing rights at Rockall, which is some 400km off the Co Donegal coast.

Mr Coveney said the Irish Government’s position on the waters around Rockall is clear – “they are an EU fisheries ground”.

“The Common Fisheries Policy applies. Quotas are allocated every December including quotas for Irish boats to catch fish in the Rockall area,” he said.

“What we do not accept is that a very small rock constitutes a sovereign territory that can have a 12-mile limit set around it. That is what the Scottish government is claiming and we do not accept that.”

Mr Coveney said Irish vessels have been fishing in the waters for “many, many years” and that there has never been an issue in relation to enforcement.

“We recognise that there is a different legal view in the UK and, in particular, in Scotland with regard to Rockall than is the case here.

“The way to resolve this issue is not to try to force Ireland to change its policy towards Rockall and its legal opinion in relation to Rockall with the threat of (fisheries) enforcement.

“The way to resolve this is through negotiation and discussion. There are diplomatic channels very much open in a very senior way between both Governments today.”

Minister for Agriculture, Food and the Marine Michael Creed said the Government has not “even contemplated” sending in Navy ships.

“That kind of action only escalates the tension around this issue. What we are trying to do is de-escalate it and find a way through the present difficulties by diplomatic and political contacts,” he said.

“What we have said is that we will exhaust all of the legal options that are available to us – we will provide legal assistance and advice to our individual fishermen who may be subject to that (boardings) but we will also explore all of the international forums that are available to us to prosecute our view which is that we have a legal right to be there.”

Mr Creed said the Government does not recognise UK jurisdiction over Rockall.

“The reality is that Irish boats have been subject to compliance within Rockall for many years . . . We do hope that this issue can be resolved. We clearly believe that we have a legal right to fish there.

“We have nearly 900 tonnes of haddock quotas to be allocated under EU law last December to be caught there.We believe our fishermen are within their legal rights to be catching that quota there.”

Downing Street said that fishing was a devolved matter but added that “these are UK fishing waters” and that UK fishermen are entitled to fish there.