Presidential election: Everything you need to know before voting

Q&A: What will the ballot papers look like and what will I be asked?

President Higgins casts his vote as the polls open in the 2018 Presidential election. 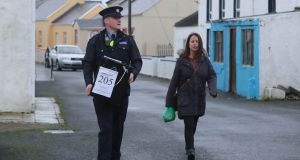 Marian Roarty presiding officer and Garda Eamonn McGinley after arriving by helicopter on Tory Island, off the coast of Co Donegal, with a ballot box for the presidential election and referendum on blasphemy. Photograph: Niall Carson/PA Wire

Polls opened at 7am on Friday for the presidential election and a referendum on removing the offence of blasphemy from the Constitution.

When you arrive at your polling station you will be asked to state your name and address. You may be required to produce evidence of identity, and may not be permitted to vote if you fail to do so.

Where the presiding officer is satisfied as to the elector’s identity, a ballot paper is stamped and handed back to the person voting.

On Friday there will be two ballot papers, one for the presidential election, which will have six candidates on it, and a second ballot for the referendum, which will have a Yes or No option. Polling stations will remain open until 10pm.

You can follow all of the latest election news on The Irish Times’ liveblog running throughout the day.

On the ballot paper for the presidential election, the six candidates will be listed in alphabetical order according to their surname; Peter Casey, Gavin Duffy, Joan Freeman, Seán Gallagher, Michael D Higgins, and Liadh Ní Riada.

The voting system used in Ireland is called proportional representation - single transferable vote (PR-STV). Under this system the voter marks the candidates in order of preference, placing a number 1 in the box beside the candidate they wish to vote for, and then a number 2 beside their second preference, and so on.

Voters do not have to fill in the entire ballot, and if they wish can mark the box beside their preferred candidate, and leave the rest blank.

When the votes are being counted, if no candidate has secured enough first preference votes to be elected after the first count, the candidate with the least amount of votes will be eliminated. The eliminated candidates’ votes are then redistributed in the second count.

The other ballot that people will be asked to vote on is a referendum on whether to remove the offence of blasphemy from the Constitution.

Blasphemy is defined as “the action or offence of speaking sacrilegiously about God or sacred things”. The last criminal prosecution for blasphemy in Ireland was in 1855.

The referendum is proposing to remove the offence from the Constitution.

Voters will receive a ballot paper that says “Do you approve of the proposal to amend the Constitution contained in the undermentioned Bill?”.

Below this will be the name of the Bill: “Thirty-seventh Amendment of the Constitution (Repeal of offence of publication or utterance of blasphemous matter) Bill 2018.” The ballot paper will have two options, Yes or No.

The vote count will begin on Saturday morning, in centres across the country. You can follow the Presidential election and blasphemy referendum counts live with The Irish Times all weekend. We will have live results as they come to hand across Saturday and Sunday as well as expert analysis and commentary.