Turnout on islands for presidential election and referendum has been low 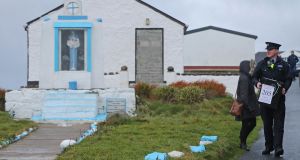 Turnout has been low and slow during the day on 12 west coast islands where voting in the presidential election and blasphemy referendum has been taking place.

Polling station staff on Mayo’s Clare island reported a 30 per cent turnout by late afternoon, while four Galway islands reflected a similar pattern in the early part of the day.

Only a handful of voters cast their ballots before morning ferry sailings from the three Aran communities. Turnout by 6pm on the southern most Aran island of Inis Oírr was just under 25 per cent, but it was anticipated that this might increase after the evening ferries.

Some 2,601 people are registered to vote on 19 offshore islands, but 12 of those off Mayo, Galway and Donegal are voting a day ahead of the rest of the State.

Turnout on Arranmore was also low by afternoon, while Tory island’s turnout is expected to be influenced by the funeral of island king, Patsy Dan Rodgers, who died at the weekend.

The total electorate for all 19 islands is 2601 voters, but this does not include names on the supplementary register. This is 10 less than the total number registered on islands for the referendum on the Eighth Amendment to the Constitution.

Fianna Fáil spokesman on regional development, Gaeltacht and the islands Éamon Ó Cuív said he was confident that this week’s vote would mark the “last time” that islanders would not vote on the same day as the rest of the State.

“As a consequence of transport difficulties and the impact of adverse weather on these services, islanders have historically cast their vote up to three days ahead of the general populace.

“However, we have improved transport services, and therefore this is no longer a valid reason for non-polling day voting,” he said, describing it as “very unfair ” to the island electorate, particularly students and fishing crews.

“Many islanders either study or work on the mainland but live on the island and like others nationwide they like to return to the island to vote, ” Mr Ó Cuív said.