EU commission candidates to be named in ‘next two days’, says Taoiseach

‘No strain’ on relationship with EU Commission president - Micheál Martin 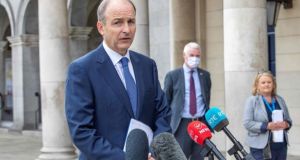 Taoiseach Micheál Martin said the Government is ‘quite entitled to deliberate’ on its nominations for the job of EU commissioner. File photograph: Paul Faith/AFP via Getty Images

The names of “two strong candidates” will be submitted to the European Commission in the next two days, Taoiseach Micheál Martin has said.

Speaking on Thursday, Mr Martin also said there is “no strain” in the relationship between him and European Commission president Ursula von der Leyen.

“There is no strain. There is full understanding there, a good relationship there. She is fully understanding of the situation and how it all unfolded.”

He added that the Government is “quite entitled to deliberate” on its nominations for the job of EU commissioner in light of the resignation of Phil Hogan and said that it is “gross hyperbole” to say the situation is damaging Ireland’s international reputation.

Senior Government sources said on Wednesday night that Minister for Foreign Affairs Simon Coveney is not expected to allow his name to go forward for the position, a move which is likely to clear the way for MEP Maireád McGuinness to be nominated for the role.

While Mr Coveney has made no announcement about a final decision, sources believe that he is moving away from allowing his name to go forward in the belief that he would not retain the trade portfolio, or be allocated another significant Brexit-related role.

Both officials and politicians have been taking extensive soundings in Brussels in recent days in a bid to establish what portfolio in the European Commission might be available to the various possible Irish nominees.

If Mr Coveney does not go forward for the nomination, it means that the Government will have to find another man to nominate if it is to comply with the request from Dr von der Leyen for “a woman and a man”.

A number of Fine Gael figures were being suggested last night, including former adviser and European Investment Bank director Andrew McDowell, though in Mr Coveney’s absence it is expected that Ms McGuinness will be strong favourite to secure the nomination. The MEP and former minister, Frances Fitzgerald, has also signalled her interest.

Tánaiste and Fine Gael leader Leo Varadkar told his party’s TDs on Wednesday night that he expected clarity on the nominations for the role of EU commissioner by the end of this week.

Sources present say Mr Varadkar was “at pains to point out that the commission wants a woman and a man, not a man and a woman. He outlined that clearly”.

The Fine Gael leader said he expected nominations to be formalised by the end of the week. Mr Coveney told the meeting that the issue should not be let “drift” and that the Government needed to get on with its work.

Some senior Fine Gael figures were critical of Mr Varadkar for not pushing through a nomination for Mr Coveney sooner, claiming that Ms McGuinness was not popular with some Fine Gael TDs. But sources close to Mr Coveney played down any talk of a rift.