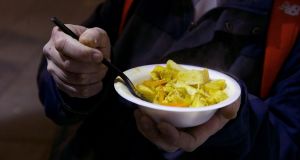 A Catholic bishop has described the homeless crisis as “a scandal” which must “be addressed with urgency by any incoming Government”.

Bishop of Raphoe Alan McGuckian said that having more than 10,000 people homeless “in a society of relative economic prosperity is a scandal which cannot become a societal norm”.

He said homes are increasingly becoming regarded as financial assets rather than essential needs. “This way of thinking needs to be reversed to put the person, the family and the local community at the centre of housing policies.”

Family homelessness and the increasing number of children in temporary accommodation “must be addressed as the distress, worry and trauma which these families and children endure is immense and will have lasting impact on their opportunities in life,” said Dr McGuckian, whose diocese covers most of Donegal.

The ongoing difficulty young people faced in renting or buying their own home “could have serious implications for society”, he warned.

Dr McGuckian, who is chairman of the Catholic Bishops Council for Justice and Peace, called on all politicians to “commit to prioritising the common good in any new government, ahead of political spin, point-scoring or popularity”.

On climate action, he urged politicians to “prioritise immediate action on this issue which not only affects us nationally but has global consequences .”

They should also “ensure that certain sectors of our society, such as the agricultural sector and those already experiencing poverty, are not disproportionately disadvantaged by climate-related policies.”

On migrants, he pointed out that emigration dominated Ireland’s history for centuries. He said the council was concerned “at the increase in incidents of intolerant and racist language and actions by a small minority in our country”.

The Methodist Church in Ireland has also called for the next government to commit “to building tens of thousands of social housing units in the coming years on public land available to the government rather than holding out for private developers”.

It also said its supported the call by campaigner Peter McVerry for a change to the Constitution to make the provision of housing a right.

It was “concerned that all in political office, particularly TDs, would take positive steps against racial rhetoric within our public sphere” and that the government “deal transparently and positively in regard to the housing of asylum seekers”. It also said it wants to see an end to direct provision.

The next government should also “be committed to the reduction of carbon emissions and a just transition away from fossil fuels within Ireland and to play its part in global efforts to this end”.