Taoiseach Leo Varadkar and Solidarity TD Paul Murphy came to blows in the Dail after Murphy asked for an investigation into the Jobstown trial. The Taoiseach responded saying Murphy should, 'apologise' to Joan Burton and her advisor.

At approximately 2:30pm during the Jobstown protest a vote was held to keep the then Tanaiste Joan Burton there or to slow march her to the bypass. 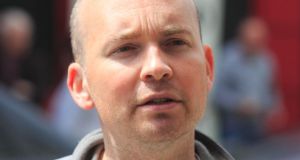 Solidarity TD Paul Murphy was told by Taoiseach Leo Varadkar that he should apologise to Joan Burton and Karen O’Connell over the Jobstown incident. Photograph: Gareth Chaney/Collins

Solidarity TD Paul Murphy is not a criminal.

But is he a baby-faced thug?

Depends on your viewpoint.

In Dáil exchanges on Wednesday, the balance of opinion tipped firmly to the side of thuggery. Taoiseach Leo Varadkar’s unvarnished use of the word met with approval from the majority of TDs, with the exception of Sinn Féin, the three members of Solidarity and a few others.

(Sure nobody laid a hand on tánaiste Joan Burton and her assistant Karen O’Connell when they were trapped for hours by a protesters banging on their car windows, shouting obscenities and refusing to let them leave the grounds of an education centre. It was a “peaceful protest”.)

The TD for Dublin West was subsequently tried on charges of false imprisonment and exonerated last month by a jury of his peers who reached their verdict quickly, dismissing sworn evidence from a parade of garda witnesses.

Garda witnesses don’t always get things right, but in his case, Murphy is right to ask why so many of them got it wrong.

“Will we keep her here for the night?”

That’s one part of their version of events that he says bolsters his belief that “numerous gardaí lied under oath”. He began his Dáil contribution by reminding everyone of this inaccurate line used against him.

Murphy, channelling Oscar Wilde, remarked: “One garda misremembering this under oath would be an unfortunate error. Two gardaí remembering the same words that weren’t said – an incredible, almost unbelievable coincidence. But three gardaí, Taoiseach? You tell me what you think that means.”

By the way, after the two women had been locked into their car for hours, the Solidarity TD addressed the crowd and said: “If they withdraw the public-order unit, do we agree to let her go?”

He has previously explained he did this, in a selfless display of civic spirit, on the request of the gardaí, who were having difficulty policing the situation.

The man is a saint.

Because a long time before this is plenty of footage of a smiling Murphy getting stuck in, leaning up against the boot of the then tánaiste’s car with other protesters at one point, then getting his shirt pulled off his back as officers attempted to drag him up from his sit-down protest in front of the blocked vehicle.

The soundtrack features an apoplectic man roaring “That’s a TD you’re mishandling there! That’s a TD!”

Being part of a group detaining a frightened woman TD against her will is entirely different. A matter of carry on, that’s a member of the Labour Party we’re mistreating there.

Murphy was almost levitating with righteous indignation when he took his case for conspiracy to the Dáil.

He has every reason to be angry at the manner of his arrest – six gardaí arriving at his home at seven in the morning to take him to the station. This wouldn’t happen to defendants of the pinstriped variety. And he is entitled to be deeply suspicious about what could be seen as a deliberately heavy-handed approach to his case.

Hence his attempt to rerun parts of the trial in parliament, to make grave allegations, under privilege, of perjury and conspiracy by members of An Garda Síochána and to call for an independent inquiry into the garda prosecution of his case.

But Murphy is no martyr.

As he went on about the wrongs he has had to endure, people remembered those scenes from the car park in Jobstown when protesters disrupted a happy event celebrating a successful adult education initiative in their community.

It was wrong, simply wrong, to condone and encourage a volatile situation where two women, political people or not, were subjected to a very frightening experience.

When the Taoiseach responded to Murphy – the very picture of injured innocence – he wasn’t buying his story.

“You had a fair trial and you were acquitted, but that doesn’t mean your behaviour was right.”

On Wednesday, not one TD, amid all the roaring and shouting, denied the court verdict, or questioned it.

So when Murphy bleated: “It might pain you all, or at least lots of you, that a jury actually watched the evidence and found us not guilty. I’m sorry, but that’s the way it works.”

But nobody was questioning the result. The Solidarity TD was just too wrapped up in his own martyrdom to recognise it.

Ruth Coppinger was equally affronted on his behalf.

“It’s an awful pity there are juries, isn’t it?”

The Solidarity TD’s call for an inquiry and exaltation in his exoneration drove some in the chamber to the verge of apoplexy.

“So, she was not locked inside the car?” asked Mary Mitchell O’Connor.

From the heights of his self-righteousness, Murphy begged to be heard. “Excuse me. You might not agree with the call for a public inquiry. Fianna Fáil in particular might be nervous about these points being raised. . .”

Murphy persisted with his belief that he has been the victim of Garda lies – a full-blown Garda conspiracy.

He disregarded the charge he was abusing parliamentary privilege and he disregarded repeated invitations from Minister of State for Finance Patrick O’Donovan to repeat his allegations outside the protection of the chamber.

The Taoiseach didn’t get involved. He listened, expressionless, before replying.

“It may well be the case that you were not involved in kidnapping but it was thuggery and your behaviour was wrong. The protest was ugly. It was violent. It was nasty,” continued Leo, in unhurried, level tones.

“That is outrageous,” said Ruth.

The Taoiseach refreshed the memories of the Jobstown protest and the television coverage – “the anger, the virulence, the words that were being directed at two women going about their course of work . . . a water balloon being thrown in somebody’s face.”

Coppinger had a fit of the vapours, speechless at what she was hearing.

And he told the deputy he should apologise to the two women for what they were forced to endure.

Varadkar’s plain speaking will have done him no harm among voters who adhere to the classless credo that “thuggery” is never the way to go.

But nobody can ever take away the innocence of Murphy, although after Wednesday’s display one can’t help but wonder if a conviction might have yielded greater dividends for the socialist firebrand.