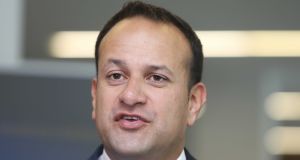 Taoiseach Leo Varadkar told Sinn Féin leader Gerry Adams that Minister for Culture Heather Humphreys had assured him that funding for the case, “if there even is a bill . . . will not come from the 2016 commemoration fund”. Photograph: Leah Farrell/RollingNews.ie

In an apparent U-turn, the Government will not use money from the centenary commemoration fund to pay for its legal challenge to a High Court ruling about Moore Street as a national monument. Taoiseach Leo Varadkar, however, has rejected a Sinn Féin call for the appeal to be halted.

The State is challenging the decision to designate a wider area in and around Moore Street as a national monument given its 1916 Rising connections.

Mr Varadkar told Sinn Féin leader Gerry Adams that Minister for Culture Heather Humphreys had assured him that funding for the case, “if there even is a bill – of course we do not know what the outcome is going to be – will not come from the 2016 commemoration fund”.

Last October, the Minister told an Oireachtas committee that the legal costs were likely to come from the fund established for projects to commemorate the decade of centenaries.

The Taoiseach said the State was appealing the case on a point of law “and because of the potential impacts it could have on other developments around the country” as the judgment extends the scope of national monument status.

The State has acquired house numbers 14 to 17 Moore Street and part of number 18 on the street where the leaders of the Rising signed the surrender.

Mr Adams said it was an “indictment of successive governments that the site has not been developed as a heritage site or national monument, but allowed to fall into dereliction”.

He added that the Taoiseach should consider the irony that the relatives of the leaders of the Rising were in the High Court to oppose the Government’s plans, during the 1916 centenary commemorations.

Mr Adams referred to the consultative group established by the Minister which also recommended the development of the Moore Street area as a battlefield site and part of a historical cultural quarter.

The Minister had accepted the report, though it had not yet been brought to Cabinet. Mr Adams said “on one hand the Minister is appealing a court ruling that Moore Street be preserved, while on the other hand she has accepted a report recommending the preservation of this iconic site”.

Mr Varadkar said the report signalled the “potential for a successful outcome to be agreed between the relevant parties that balances the perspectives of all the key stakeholders”.

He said the next step was the establishment of a new advisory group which the report identified as the most effective way to move forward with its recommendations and its work is under way.

But Mr Varadkar replied that “as the deputy will be aware the Republic was proclaimed outside the GPO, not on Moore Street”.

He said the vision he had was to see a Republic in which “every individual and every part of the country has an opportunity to share in our prosperity. That is why infrastructural development is so important”.