Dilemma for Donohoe as politics vies with prudence 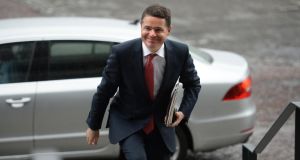 Fine Gael backbenchers, their eyes on the votes of the squeezed middle, clamour for tax cuts; Ministers assemble their demands for more spending. The political reality is that a decent giveaway budget is required, with spending increases and tax cuts sufficient to make an impact on the Government’s stuttering political fortunes. This may, after all, be the last budget before an election.

Minister for Finance Paschal Donohoe is naturally inclined to prudence. The experience of knocking on doors in Dublin Central in the period 2011-2016, defending Fine Gael’s austerity policies, convinced him that avoiding a repeat of the economic Armageddon that preceded the age of austerity must be the single greatest priority for the country and for its politicians.

But the Minister is also a politician.

Yesterday, Donohoe laid out the groundwork that will precede his first budget as both Minister for Finance and Minister for Public Expenditure. The numbers were no surprise – strong economic growth, tight fiscal situation, limited room for manoeuvre.

The fiscal space – the scope for additional spending and tax cuts – remains at its previous estimate, Donohoe said, at €1.2 billion.

But €700 million of that is already spoken for, taken up by announcements in last year’s budget. That means only €500 million remains for the budget-day package. From that must come €200 million for public-sector pay increases, leaving just €300 million for tax cuts and spending increases. This may be diminished further by the bill for water-charge refunds, which could reach €160 million, leaving a relative pittance for budget day.

That, frankly, is not in tune with political reality. And everyone knows it. It would not be possible to construct a budget that would keep the Government together with a couple of hundred million euro. Even the most credulous observer can see that.

That means that Donohoe has to find more money for Budget 2018. Luckily, some technical recalculations about the fiscal space will be undertaken before the budget which are likely to result in its expansion – and so provide more money for a budget-day package.

The Government is in a rolling discussion with the European Commission on the matter and on Wednesday Donohoe acknowledged that the fiscal space may change before the budget. These are technical calculations but in reality they are not immune to political reality.

As well as expanding the fiscal space, Donohoe says he has another route to more cash. He speaks about the €60 billion of total spending and says that we must look for savings there too.

But he knows that no budget starts with a blank page; actually, his starts with €60 billion or thereabouts worth of spending commitments. Every politician ever has promised to finance more spending by finding efficiencies, or eliminating waste. This isn’t the biggest political wheeze ever, but it’s close.

The fact is that if Donohoe wants more money, he must tread – maybe only a bit, but maybe a lot – on the toes of prudence. He might not like that, but he knows he must.

1 Covid-19: Travel restrictions to stay and 'green list' put on hold amid fears of second wave
2 Bobby Storey: The IRA's planner and enforcer who stayed in the shadows
3 ‘Only a civil servant’ could have come up with ‘unenforceable’ pub regulations
4 Trump claims US is under siege from ‘far-left fascism’ in Fourth of July event
5 Miriam Lord’s Week: Martin sparks Olympian levels of whingeing in Fianna Fáil
Real news has value SUBSCRIBE