Taoiseach Leo Varadkar and Solidarity TD Paul Murphy came to blows in the Dail after Murphy asked for an investigation into the Jobstown trial. The Taoiseach responded saying Murphy should, 'apologise' to Joan Burton and her advisor. 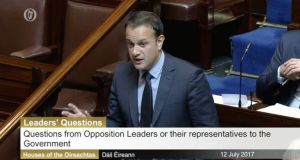 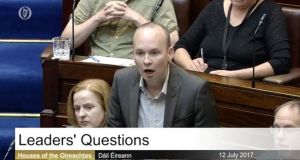 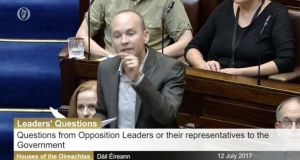 Taoiseach Leo Varadkar told Solidarity TD Paul Murphy on Wednesday that he owed a public apology to former tánaiste Joan Burton, her adviser Karen O’Connell and to the people who got caught up in the protests at Jobstown in 2014 of which he was a leader.

There were heated exchanges in the Dáil and repeated interventions by Ceann Comhairle Seán O’Fearghail as Mr Murphy repeated calls for an independent inquiry into the conflict between the evidence of three senior gardaí and video footage of the protests.

Mr Murphy and five others were acquitted of the false imprisonment of Ms Burton and Ms O’Connell in the protests in Tallaght in west Co Dublin.

When Mr Murphy raised the issue, the Ceann Comhairle repeatedly reminded him that he was “completely out of order” to review the outcome of a court case.

He said Mr Varadkar had expressed concerns about statements by the gardaí and then “you come into the Dáil and put them on the official record of the Dáil. We can prove that they weren’t said.”

He called on Mr Varadkar to retract his comments and correct the record.

As he was heckled, he said TDs might not agree with his call for a public inquiry into the matter, but it was a very serious public interest in this.

Mr Murphy said he believed numerous gardaí “lied under oath. I think they did so in a coordinated way. I think that implies an agreement to commit perjury.”

Later, the Ceann Comhairle said the transcripts would be examined after Fianna Fáil leader Micheál Martin asked if it was in order to say that three people not in the House to defend themselves “are guilty of perjury”.

Mr Martin said it was a precedent that “opens up all sorts of new horizons”.

Addressing Mr Murphy, the Taoiseach told him: “You’re not a victim here. You’re not the victim of any conspiracy. You got a fair trial here and you were acquitted. But that doesn’t mean your behaviour was right.

“And it may well be the case that you weren’t engaged in kidnapping but it was thuggery and your behaviour was wrong. The protest was ugly. It was violent. It was nasty.

“And the coverage showed the anger, the virulence, the words being directed at two women going about their work, a water balloon being thrown in someone’s face. All those things are something that is unbecoming in somebody who is a member of this House.”

He added that “instead of trying to present yourself as a victim and demanding a public inquiry, you should offer a public apology to Deputy Burton and Ms O’Connell”.

Mr Murphy said a 15-year-old, who was convicted in the children’s court of false imprisonment on the same evidence that was contradicted before a jury and disbelieved by a jury, was a victim, and he called on the Taoiseach to support his appeal.

He said others, like his co-defendants, people who lost jobs, those who still have this hanging over them, are also victims.

It was a matter of public interest if gardaí gave false evidence under oath, he said. “It was completely illogical to ask senior gardaí to investigate whether their members co-ordinated perjury to try to get prosecutions in the first place and to proceed and to try to stitch people up for false imprisonment.”

But Mr Varadkar said: “You should give a public apology to all the people you led. You were part of that leadership and you owe those people who got caught up in this an apology as well, particularly the young people and the minors who should not have been led in that sort of protest.”