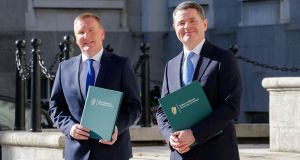 Minister for Finance Paschal Donohoe and Michael McGrath, Minister for Public Expenditure, at Government Buildings prior to the announcement of Budget 2021. Photograph: Crispin Rodwell

Pledging to tackle the challenges of “an era of great uncertainty and increasing risk”, the coalition on Tuesday said it would borrow more than €40 billion between this year and next to meet the costs of the pandemic, to support jobs and business and to sustain an economy ravaged by social and economic restrictions.

Minister for Finance Paschal Donohoe said the Government was borrowing to spend and support the economy so that the country could “recover more quickly and prevent a recession running into a depression”.

As a result of the budgetary plans unveiled on Tuesday, the national debt is now projected to be €240 billion by the end of 2021, by which time the Government hopes a recovery will be underway.

“We are aware of what that means in terms of the growth of national debt,” he said last night.

Minister for Public Expenditure Michael McGrath signalled that the borrowing and spending would not continue at the current level. “We cannot add €20 billion every year,” he said. “That goes without saying.”

But budget documents published yesterday contained a “worst case scenario” in which a no-deal Brexit, further lockdowns and no vaccine or treatment next year pushed the State’s finances even deeper into the red.

The documents warn that in a severe scenario involving “stringent restrictions over a prolonged period”, GDP would decline again in 2021 and the unemployment rate, instead of falling back to 10 per cent, would stay stuck around 14 per cent. In this scenario, the deficit this year would rise to €22 billion and €25 billion in 2021, leading to significant longer-term implications for the economy and the public finances.

Up to €5,000 a week for Covid-hit firms, hospitality VAT rate cut VIEW NOW

Senior officials however insisted yesterday that the Government was determined there would be no return to a national lockdown.

With little restriction on the resources available to him, Mr McGrath unveiled a series of spending increases across all areas to tackle the pandemic. There were, as expected, big increases in health and welfare spending, but also in education, the arts, justice and law enforcement, environment and climate, and in capital funding for social housing.

A new scheme will provide a maximum of €5,000 a week for businesses forced to close because of Covid-19 restrictions, while there will be, as expected, a reduced VAT rate for the hospitality sector from 13.5 to 9 per cent, with effect from November 1st and continuing until December 2021.

No significant changes to income tax credits or bands were announced, while carbon tax will be increased by €7.50 to €33.50 per tonne of CO2. Legislation will increase carbon tax each year to achieve the €100 per tonne level.

There will be changes to vehicle registration tax and motor tax so that vehicles with higher emissions will become more expensive.

Mr McGrath also announced funding for 400 special needs teachers, 1,000 special needs assistants, and an additional 500 teachers to reduce the pupil-teacher ratio in primary schools to 25:1; while third-level students will receive €250 each to help with the costs of online learning.

An extra €4 billion has been allocated for the health service, to meet the costs of Covid but also for permanent expansions in capacity.

Some €5.2 billion is being allocated to housing, with an extra €500 million directed towards capital expenditure to fund the construction of 9,500 social housing units in 2021, Mr McGrath said. He also unveiled a €50 million Live Entertainment Supports package, while Arts Council funding will increase to €130 million, a €50 million increase on last year’s allocation.

Opposition parties and deputies attacked the budget as a “missed opportunity”. Sinn Féin finance spokesman Pearse Doherty said it was consistent with the Government’s record since it took office – “indecisive, unprepared and too slow to act”.

He criticised pay increases for politicians while the Pandemic Unemployment Payment was cut, and the party’s public expenditure spokeswoman, Mairéad Farrell, said Sinn Féin would cut TDs’ and Senators’ salaries.

But the prospect of dissent within the Green Party receded last night with all its TDs welcoming the budget. Besides climate change measures, the party said it also succeeded in inserting “just transition” measures in the budget including qualified child allowance, as well as increased fuel and living alone allowances. Neasa Hourigan, who voted against the Government in a vote on housing in July, issued a statement welcoming the budget, including measures on disability and mental health.