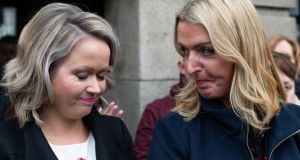 The public gallery was packed with women let down by the system. They were waiting to hear acknowledgement from the Taoiseach in the national parliament that they had been shabbily treated and deserve better from their country.

But the appointed time came and went.

Because the Dáil was still caught up in The War of the Buttons.

It’s a matter of priorities, isn’t it?

The women and the loved ones of women affected by the Cervical Cancer scandal took their seats overlooking the Dáil chamber at the invitation of their Taoiseach. This was not the first time a group of women wronged by the State came to Leinster House for a measure of vindication in overdue words.

The last time was in February 2013 when Enda Kenny delivered an emotional apology on behalf of the nation to the survivors of the Magdalene laundries.

Tuesday’s occasion was similar in some ways, but very different in others. Not least in the response of too many TDs, particularly those on the Government side, who didn’t see fit to turn up for such an important moment in Dáil history.

Too busy, perhaps, getting excited over the diverting “Votegate” controversy exercising scheming political minds as deputies obsess over whether or not there will be a general election next month. Too busy sending out tit-for-tat press releases and tweets about who pressed whose voting buttons when they shouldn’t have. Too busy stirring the pot.

To paraphrase the late Liverpool manager Bill Shankly – some people say politics is a matter of life or death, but it is much, much more important than that.

The chamber was packed on the night the Magdalene women were recognised. For all the sadness, for all those who never got to witness the moment, there was also a feeling of joy and celebration in the air.

At the end of Taoiseach Kenny’s speech, his voice cracking as he read the final lines, the people in the gallery burst into tearful applause. In the chamber below, TDs on all sides of the chamber rose to their feet and cheered and applauded them.

For that time at least, there was a proper sense of closure. You could see that it meant so much to the women and that they believed they would now be looked after by the State which made them outcasts so many years ago. It didn’t quite work out that way.

This time, there are no relieved smiles in the gallery. There is no sense of a great shadow being lifted. But yes, there are tears too and, like before, many of the women hold hands tightly with loved ones who have suffered with them.

As Labour TD Alan Kelly said in his speech: “An apology isn’t going to bring back any of the women who have passed on, like Emma Mhic Mhathúna. Or change the terminal diagnosis others have, or prevent the fact that some women, such as Lorraine Walsh, can’t have children, or make up for much of the medical complaints that many of the women have.”

And yet it was needed and it was welcomed and it was very graciously and generously accepted by members of the 221+ support group for women and families damaged by the CervicalCheck debacle.

“Today’s apology is offered to all the people the State let down. And to the families who paid the price for those failings,” said Varadkar, almost all his cabinet present for his statement. “It was a failure of our health service, State, its agencies, systems and culture.”

He said sorry again and again and again. Outlining a long litany of shortcomings, he apologised for “the humiliation, disrespect and deceit” and “the false reassurance”.

The group would later call this official apology “a watershed event”.

But it didn’t start on time because the fulminating about an abuse of the electronic voting process in the Dáil was in full swing. The business of the House ran late as Sinn Féin called a vote.

“And Ceann Comhairle, can there be a headcount?” asked party leader Mary Lou McDonald as the people in the gallery waited patiently.

As the division bells rang, a number of Ministers, along with the Fine Gael party chairman and the Chief Whip, held a whispered confab around the Taoiseach’s chair. Plotting their next move in the controversy. Across the chamber floor, Micheál Martin and his Fianna Fáil troops sat quietly, glowering over at the scene.

The vote broke into the Order of Business, which still had some way to go. In the end, no vote was taken because the Government didn’t put any tellers forward. The atmosphere was such that nobody seemed to notice the rows of solemn faces looking down and TDs prepared to resume hostilities.

The Taoiseach stood and did the right thing. “Ceann Comhairle, we were meant to have the State apology at 3 o’clock and there are people in the gallery.”

Only then did the rest forget about themselves, immediately shushing.

Leo, “speaking as a doctor, a politician, a brother and a son”, began.

“As Taoiseach, on behalf of the State, I apologise to the women and their loved ones who suffered from a litany of failures in how cervical screening in our country operated over many years.”

A handful of Government backbenchers were present. By the end, only about four of them managed to stay the course. Most Fianna Fáil members stayed for the duration.

The empty seats did not go unnoticed above.

In the gallery, tissues were wound around fingers and dabbed at eyes. The Dáil visitors listened intently, gravely.

A woman in the back row held a framed photograph of a woman in a white blouse and red skirt on her lap. Her name is Áine Church from Beaumont in Dublin, and the picture was of her beloved sister, Órla, who died from cervical cancer in January this year having had two negative tests.

Órla, an analyst with the Central Bank, was 54 when she died. “She made a big impression on everyone and she was very controversial and articulate,” said her father, Charlie. “She did a lot of work with the doctors on the HPV test.”

As they left Leinster House, still holding the picture of Órla, what did her sister make of the apology?

“I’m sorry to say it, but it doesn’t feel like it’s sincere. I’m sure the Taoiseach is very genuine, but women are still being fought against in the courts. So, I don’t know.”

In the Dáil, some speakers pointed out that kind words need context, and an apology is only as good as the deeds built upon it.

There was no applause when the Taoiseach finished speaking. No smiles either.

But outside, Vicky Phelan, Lorraine Walsh and Stephen Teap of 221+ welcomed the “significant” acknowledgement from the Government of the deficiencies in the system. It was only meaningful when those delivering it understood what they were responsible for.

Vicky Phelan echoed that gratitude. But she saw the empty seats.

“I do think that there were fewer politicians in the chamber than we would have liked, to be honest. I think there could have been a few more there. Everybody has a wife, a mother of a daughter, so that was one thing I did notice . . . Those who spoke, they spoke about the things that are important to all of us here.”

Disappointing that there were so few on the Government benches?

They’ll be back in force for the next round in their War of the Buttons, though.