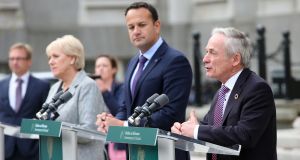 The Taoiseach’s big-ticket lecterns – three of them – were rolled out in a line at the bottom of the steps in front of Government Buildings, signifying this was not a Richard Bruton gig anymore. Photograph: Laura Hutton

Leader’s Questions came and went without a reference to Boris or Brexit.

Keeping their powder dry on all sides.

It was a question of timing. The British prime minister was still on his feet performing his keynote stand-up routine at the Tory Party conference when Leo Varadkar and his opposition counterparts commenced their midday joust in the Dáil chamber.

The Taoiseach’s presence was required. But it was interesting to see his Tánaiste and Minister for Foreign Affairs present too, as opposed to glued to the television upstairs watching Boris Johnson’s speech.

Simon Coveney sat by Leo’s side for well over an hour. For much of the time they were the only cabinet members on the front bench. As the Taoiseach took questions on housing, healthcare and bailed-out banks, a pensive-looking Coveney, fidgety fingers interlocking and steepling, seemed miles away.

Would anybody mention the B words?

The PM’s knockabout act in Manchester was well finished by the time Leo escaped the chamber. The Minister for Foreign Affairs was already in the canteen, leisurely perusing the hot counter and having the chats.

There was an air of calm about the two men in Leinster House. It was as if they weren’t expecting any surprises from across the water, during or after Johnson’s address.

Meanwhile, an announcement by Richard Bruton about a major renewable energy collaboration between Ireland and France, which had been scheduled for the Italian Room in Government Buildings, moved up the news agenda. Enterprise Minister Heather Humphreys was now going “to deliver an important message for businesses on financial supports available for Brexit” at this media opportunity.

‘Subject to his availability’

And then the bit which had the television news crews and political correspondents diverting to Merrion Street.

“The Taoiseach may also attend subject to his availability.”

Who knew there would be such interest – national and international – in the news that the Irish government has been given a big EU grant towards the billion euro “Celtic Interconnector” electricity link? Whatever that might be.

The Italian Room went out the window. The Taoiseach’s big-ticket lecterns – three of them – were rolled out in a line at the bottom of the steps in front of Government Buildings, signifying this was not a Richard Bruton gig anymore.

Soon after 2pm, ministers Bruton and Humphreys swept down the red-carpeted stairs and through the main doors, flanking the fortuitously available Taoiseach. He took the middle lectern and made the announcement Richard would have made without the drama or audience.

This Celtic Interconnector is a very expensive piece of engineering. Around a billion, give or take.

“I wrote to [EU]President Junker about it some weeks ago. I had hoped that we would get some new funding but didn’t expect to get quite this much,” marvelled Leo. “Five-hundred-and-thirty-million euro is pretty huge and will cover more than half of the entire project.”

That’s more than half the cost of the interconnector, he pointed out unnecessarily. Isn’t Europe great all the same? Why, Mr Junker, with all these millions you are spoiling us.

Richard Bruton filled in some more detail. At the moment, our energy standby capacity is reliant on the existing interconnection with England. “And it’s smaller – it’s only 500 megawatts and this will be 700 megawatts.”

The underwater electricity connection will link Ireland with France and, all going to plan, could be ready in around six years’ time. Once the UK leaves the EU, the interconnector goes too.

This Franco-Irish link will hook up Ireland with the EU’s energy market post-Brexit. It represents “solidarity with the rest of the European Union”, said Richard, and will result in cheaper and greener electricity.

“I would like to thank all of you who have played such an important part,” said the Minister, including “RTÉ”.

What? No wonder they’re talking about having to sell Lyric.

He hastily explained the billion-euro project is a joint venture between EirGrid and its French energy counterpart, Réseau de Transport d’Électricité (RTÉ).

Heather Humphreys then reminded businesses to get cracking before the effects of Brexit take hold, by applying for support funding through the Brexit Loan Scheme – there’s hundreds of millions available in Brexit insulation.

Speaking of which (it was the reason the Taoiseach crashed the Richard’s interconnector party), Leo was still coming to terms with the leak of the “non-papers” at the beginning of the week, purporting to outline the UK’s final negotiating position on the Backstop.

“Not very promising,” he said.

Was there anything in Boris Johnson’s conference speech signalling possible movement?

“I actually didn’t have a chance to hear Prime Minister Johnson’s speech. I was in the chamber taking questions myself.”

In the chamber with his Foreign Minister beside him. It meant neither of them could comment on the latest Brexit musings emanating from Boris in Manchester. As for the leaks in those non-papers, Leo couldn’t really comment on them either as he didn’t see the non-papers concerned.

However, the Fianna Fáil leader winkled out an interesting nugget of information from the Taoiseach during later questions, when few where paying attention.

As Leo was sticking by his lack of knowledge of the British position and publicly remaining aloof from the current state of play between the EU and the UK, it transpired he knew a lot more than he was letting on.

Had he been given a briefing from Number 10 on the leaked non-papers?

“I can confirm that two of prime minister Johnson’s aides visited Dublin and came yesterday morning to Government Buildings, where they gave my officials and advisers a verbal briefing on the UK Government’s proposals,” replied the Taoiseach.

He never said that on Tuesday afternoon when the subject was broached in the Dáil.

Because “no documents were exchanged”.

Leo didn’t want to comment on any proposals due from the British “until I have had a chance to see them and study them”.

“You know what they are, though,” surmised Micheál.

This caper is far from over.