Miriam Lord: Was Leo caught rapid reading a budget speech someone else wrote?

Taoiseach tries to impress with biblical and literary quotes, but is hoist by his own petard

In his post-Budget speech Leo Varadkar struggled with some of the literary references to the amusement of many in the opposition benches. Video: Oireachtas 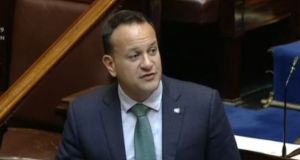 And still they gawped, and still the sniggering grew. That one smallish head could carry all he knew . . .

Leo Varadkar knows a lot of stuff. Such a well-read Taoiseach. And gracious too. Always more than happy to share his great knowledge with that grim assortment of bumpkins and skangers they let into the Dáil these days.

Leo likes to pepper his speeches with literary references. If only to amuse himself. On Wednesday, he wowed his slack-jawed audience with a blast from the Old Testament before following up with a quote from Belgian writer Erik Pevernagie.

Where does he get the time to craft these erudite speeches? Who does he think he is – Michael D?

A small but perfectly formed crowd waited in the Dáil after midday to hear the Taoiseach deliver his first contribution on Budget 2020 and prove for once and for all that he has read more books than his Minister for Finance.

Which is true. Any doctor’s son from Castleknock who is also Taoiseach will tell you that Paschal Donohoe only reads bukes because he is from Phibsboro.

Nonetheless, the Taoiseach had high praise for Paschal, who hasn’t been seen in the chamber since teatime on Tuesday when he left to do his first post-budget interview. The poor man has hardly drawn breath from that moment, pausing only to sleep, drop the children to school and swap his suit jacket for a variety of smart casual tops depending on the setting.

A stillness settled over the benches when Leo rose to speak as soon as the last of the TDs clattering out after Leaders’ Questions unjammed themselves from the main door.

They really should have stayed for the Taoiseach’s opener.

“One of the earliest recorded examples of economic strategising appears in the very first book of the Bible,” he began, much to the surprise of the people around him.

The Tánaiste tried to stifle a smirk. He was unsuccessful.

“Joseph, son of Jacob and Rachel, was able to predict the trajectory of Egypt’s economy – a period of boom followed by a period of bust. Forewarned, he was forearmed and he was able to guide the country through the worst of the crisis, saving his own people as a result.”

Verily, Leo was telling the story of Joseph and the Amazing Technicolor Dreamcoat. Joseph based his economic predictions on his dreams. Any dream would do.

But not this time.

For Paschal, son of Jimmy and Caitlín, doth appeareth to interpret the nation’s dreams, predicting the way of The Brexit – deal, no deal or whatever you might haveth yourself. The no-deal plagues of blood, pestilence, Boris boils, Cummings canker, dungeon, fire and Farage will be overcome by Paschal and his Amazing Technicolor Dreambudget, guiding the country through the worst of the crisis, saving his own people as a result.

It’s just as well we have Paschal on the case, because the Greens and Sinn Féin have totally misread the level of threat posed by Brexit. They submitted their dreambudgets based on some sort of Brexit deal being struck, which is not a smart thing to do.

While the Greens’ attention to climate is “admirable”, ignoring the Brexit crisis that may happen in a few weeks’ time is “unfathomable”, said Leo. He said Sinn Féin has its head in the sand, ignoring the hazard ahead while proposing 18 new taxes “on business, on middle Ireland, on inheritance, on land and on almost anything” with no care as to how it will impact in a difficult no-deal scenario.

The Taoiseach prepared to bury them with a killer quote.

He suddenly stopped, looked closely at his script and did a frantic double-take before plunging in with a strangulated attempt at his name.

“You should ask whoever wrote your speech,” chortled Fianna Fáil leader Micheál Martin.

From Tánaiste down, the cabinet was cracking up but trying hard not to show it. The Opposition was under no such constraint. Clever clogs of Castleknock hoist by his own petard (or script writing professor).

Caught rapid, and he knew it. Leo started to laugh but persevered. Erik Pevarnannaaarrghee “has observed that: ‘When politicians bury their head in the sand, ignorance rules the country.’”

That would be Erik Pevernagie, Taoiseach. One of the Brussels Pevernagies, raised at the little feet of the Manneken Pis. Not to be confused with the Kiltimagh or the Annaduff Pevernagies.

Paschal would never have made that mistake. But then, he has probably read Erik’s entire oeuvre. It is a source of some pride to many colleagues that the Minister for Finance reads actual books. “Like, real books,” one of them marvelled to us not so long ago.

The Minister for Finance is also a big music and sports fan. If he hadn’t been chasing microphones all day with his technicolor no-deal dreambudget, Paschal would have hugely appreciated the rapid intervention from Ministers of State Patrick O’Donovan and Brendan Griffin when Green Party leader Eamon Ryan (who recently suggested that wolves be reintroduced in Ireland) spoke about the uninformed view in Downing Street that the Irish are not familiar with British politics.

“We have as much understanding of the form of the various parties in the UK as we do of Manchester United, Liverpool and Chelsea in the UK premier league.”

“What about Wolves?” roared the lads.

Later in the day, somebody snitched on independent TD Joan Collins when she dropped the F-bomb in the near-empty chamber, clearly livid over what she saw as the Government’s lack of concern for the marginalised in the budget.

“Youse just don’t really give a f**k,” she said in exasperation. Nobody noticed. No one in the chamber objected. The sole Government representative present was an oblivious Minister of State Ciarán Cannon.

The TD for Dublin South Central was reprimanded a few minutes later by the Leas-Cheann Comhairle. Apparently somebody told him that Joan had said a bad word. She duly withdrew it.

The day ended with Paschal and his dreamcoat still missing and the Taoiseach preparing to fly to Cheshire for a crunch meeting with British prime minister Boris Johnson.

Some people assume they will be talking about Brexit. But the smart money is on a meeting in Wayne Rooney’s massive Cheshire mansion – the former Premier League footballer is returning to England from Washington in the New Year – where the two premiers will try to broker a peace deal between Coleen Rooney and Rebekah Vardy, wife of England striker Jamie Vardy. The women have sensationally fallen out over alleged leaks to the Sun.

This could push troubled and Brexit-addled England over the edge.

The stakes have never been higher.