Miriam Lord: Can third Minister for Agriculture avoid being turfed out? 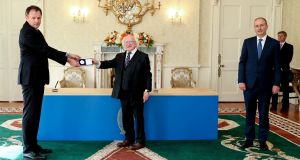 Charles III of Carndonagh was installed at a simple ceremony in Áras an Uachtaráin on Wednesday.

There weren’t many people present and there was not much of a fuss. The President did the honours, but only after the new Minister for Agriculture shelled out a €50 deposit for his seal of office. The money will be reimbursed if he manages to last more than a couple of months in office.

It makes sense. The carpet in Áras an Uachtaráin is worn out from the Government comings and goings and the profligate handing out of ministerial seals cannot be encouraged.

There’s no rest now for Michael D and Sabina. Hardly a day passes when they don’t wonder if the Taoiseach will arrive on their doorstep again with a replacement model for approval.

The latest incumbent brings the number of serving Ministers for Agriculture in Ireland this year to four: Creed, Cowen, Calleary and McConalogue. Charlie McConalogue is Micheál Martin’s third appointment to the portfolio in three months.

With a full Dáil session to go before 2020 is out, the new Coalition has already brought about a monumental C-change in Irish politics. Unfortunately, it wasn’t the sort of one they wanted.

They didn’t want “Golfgate” to happen either.

When the Dáil rose in acrimony for the summer recess amid furious Opposition resistance to the introduction of revised speaking times, it was a chance for Martin’s rattled troops to settle down and settle in and read themselves into their briefs.

What nobody expected was massive convulsions in the body politic precipitated by a balls-up in Ballyconneely involving a self-regard of (mainly) retired politicians, a trio of senior establishment figures who ought to have known better, and a George Foreman grill. This outrage in lavender sweaters, forever to be known in the annals of political infamy as “Golfgate”, saw dozens of men and a handful of “ladies” from the non-entity Oireachtas Golf Society sitting down for a full dinner in a hotel ballroom in Connemara, cocking a snook at the Covid-19 restrictions because they believed themselves smart enough to get around the rules.

Whatever about the standard of golf, at least they could sit back and admire their undimmed ability to pull a stroke in a different field.

Didn’t they have a serving minister in the room, along with a European commissioner, a Supreme Court judge and the captain of the guard in Leinster House – the uniformed invigilator who enforces the rules for everyone else in the Oireachtas? And some sort of assurance from somebody high up somewhere? And a too-clever-by-far sliding partition down the middle of the room to give the impression that they weren’t a prohibited gathering of 80 people.

A century later, and yet again Ireland was up in arms over the Partition.

The minister resigned. So did the commissioner. A few inconsequential Senators had their knuckles rapped. The Supreme Court judge appears to be lying low and the rest of the diners have melted into the scenery.

But such was the public fury over this farrago (at least Phil Hogan, who resigned as EU trade commissioner, has the George Foreman grill he won at the golf event as a memento of his once shining EU career), the Dáil had to be recalled early so the national parliament could express its anger too.

And there was a lot of anger on Wednesday afternoon when the session commenced. But it wasn’t about “Golfgate”, which seems to have blown itself out. Deputies mentioned it and roundly condemned the violation of restrictions by men from their own trade, which wasn’t exactly held in high esteem by the public before the tawdry episode and is in tatters now.

However, the row over speaking time, which led to ructions at the end of the previous session, was immediately reignited as Opposition members vowed to fight the new arrangements which will see them getting less exposure in the most high-profile time slots.

The Ceann Comhairle didn’t hold back though. As the front-of-house man for the Oireachtas, he was furious over the actions of the golf society members and he moved decisively to protect the brand. He lambasted the people who attended the dinner (only two of whom were sitting TDs, out of a total of 160 Deputies) for their “collective crass stupidity or arrogant delusion, or both”.

Sean Ó Fearghaíl was raging. A society which has no official connection to the Oireachtas and has never received a penny in subvention from it had damaged confidence in the Dáil. He called for it to disband. He also wanted to know if any other groups are “in existence operating under the Oireachtas name and symbol”.

Fine Gael’s Neale Richmond, who is captain of the Oireachtas rugby team, immediately dispatched a letter to the Ceann Comhairle seeking guidance. The team, which is drawn from politicians and Leinster House staff, regularly togs out for inter-parliamentary games and has raised thousands of euro for charity.

Sinn Féin’s Mary Lou McDonald said the antics at the golf do was an example of “the politics of the old boys’ club” rising to the surface again. “If there is anything we don’t need in public and political life, it is the old boys’ club. What we need is real change, now more than ever.”

Probably not a time to remember how she had to deny this year that she takes instructions from unelected figures in an old boys’ network in Belfast. This followed evidence at the cash-for-ash inquiry that then Sinn Féin minister Máirtin Ó Muilleoir had to ask permission from senior unelected figures linked to the party before cutting the costs of the controversial scheme.

Meanwhile, the replacement for Dara Calleary, who lost his job because he attended and addressed the golf dinner, with the partition pulled back some of the way so the audience could hear and see him, was announced.

Donegal’s Charlie McConalogue stepped into the breach and followed the well-trodden path with party leader Micheál Martin to Áras an Uachtaráin to get the presidential nod.

As has rapidly become the tradition, the Taoiseach ascended the escalator in the Convention Centre with his latest protege in tow. Immediately ahead of Micheál Martin on the descent was Minister for Foreign Affairs Simon Coveney, who may or may not be in the frame for the vacant EU commissioner job.

If the body language between the two men is anything to go by – despite being convivial types and constituency colleagues, they neither looked nor spoke to each other – the decision over who to send to Europe may still be causing problems.

Micheál bustled out to the waiting car, then looked back for McConalogue, Charles III. He couldn’t see him at first. He couldn’t have lost another Minister for Agriculture already?

Charlie then caught up. The cars lined up and faced into the direction of Áras an Uachtarain. The motorcycle outriders revved their engines.

Suddenly, the Taoiseach appeared again. He flew through the doors of the Convention Centre and across the foyer, ducking in towards the lifts to his right, a garda detective running with him.

Then he changed direction, and raced across the floor to the other side of the atrium and the other set of elevators. We wondered was he making for the underground carpark. What was going on?

About five minutes later, Micheál reappeared on the escalator, on the way down again.

He explained he left his phone behind in his seat and had hidden it so well that Jack Chambers couldn’t find it.

All the while, poor Charlie McConalogue was waiting out in the car. Sweating. But he made it to the Phoenix Park. He’s now in the job. All he has to do is hang onto it.

Sligo hospital apologises over ‘shortcomings in clinical judgment’ 16:25
Covid-19 restrictions in Europe: how does Ireland compare? 16:03
New children’s hospital will not be able to open all beds due to staff shortages, nurses say 15:56
Edwin Poots says he never sought to offend Catholics with Covid comments 15:45
‘It was hard enough the first time’: Clothes retailer mulls return to lockdown 15:24