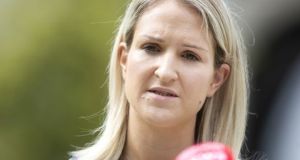 Proposed legislation will encourage ‘the small minority of licensed premises who are acting contrary to public health regulations to bring themselves into compliance’, Minister for Justice Helen McEntee said.

Síochána greater powers to enforce public health regulations on pubs and restaurants will help “bring us further on the road” to a more open society.

As smaller parties and Independents criticised the legislation as “draconian” for a small number of offending businesses, Ms McEntee insisted in the Dáil the legislation would encourage “the small minority of licensed premises who are acting contrary to public health regulations to bring themselves into compliance”.

The Bill will give An Garda Síochána powers “to act swiftly to enforce the law”, where necessary.

“This represents an unacceptable risk to human life and public health, in the context of Covid-19. It also undermines the efforts and sacrifices made by so many others in our society.”

“The Covid-19 pandemic presents an unprecedented challenge to all of our society and the public health restrictions in place since the outset of the pandemic have not been easy for anyone. It has impacted on all of our lives, in big ways and small,” she said.

“The vast majority of people and businesses in Ireland have complied with public health restrictions, across the last six difficult months because they understand that doing so is the most sure way not just of keeping us all safe but also helping us to return, as quickly as possible, to the more open society that we have enjoyed but can no longer take for granted. My firm belief is that this Bill will help to bring us further on that road.”

The legislation gives gardaí powers to inspect licensed premises for compliance with public health regulations and to issue closure orders for a day where there is a refusal to comply and for longer closure through application to the District court with closure of up to seven days for a first offence and up to 30 days for a second.

Sinn Féin justice spokesman Martin Kenny said “we are in a position now that we should not be in because the way this was handled in the past, by allowing some premises to open and others not based on whether they served food which created a huge problem.”

He said “the same problem exists in my part of the country as everywhere else where towns across Ireland might have seven or eight pubs where two operate and the rest are closed and looking on. That is totally inappropriate. If all those pubs were open, the crowds in them would be much smaller and we would not be in this situation.”

Labour TD Brendan Howlin expressed concern that the legislation “creates penalties for crimes that are not set out in the Bill”. Describing this as “very unusual” he said they were penalising the failure to keep records of visitors to pubs but “we don’t know what else will be encompassed”.