Miriam Lord: Welcome to Coalition travel agency, flying all over the place 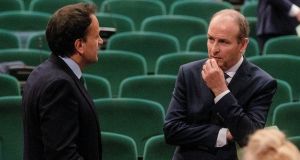 Can’t decide where to go this summer?

Talk to the experts at Overseas-a-GoGo-NoNo, Micheál and Leo’s great new travel company. Motto: “We’ll send you round the bend.”

Formed following the shock merger of rivals Fianna Fáil Holidays and Holiday Fine Gael, the beefed-up tour operator is specialising in the confusion market, which is particularly strong in Ireland right now.

“Although only in business a few weeks, we have pooled our expertise and driven significant growth volumes in what were traditionally our two strongest regions – Alloverdahplaice and Reckinyurhed,” said CEO Micheál Martin in the Dáil on Tuesday.

“Business is booming and now more people than ever don’t know whether they are coming or going. This is down to us.”

“Well actually, I have to take the credit for that,” declared chief operating officer Leo Varadkar, in a sneaky press statement to RTÉ earlier in the day. “Micheál hasn’t a clue. I’m really in charge. I was the boss before the merger and I’m still the boss in my book.”

Dreaming about an ice-cold copa de Covid in the Spanish sun?

Or that perfect germ-free getaway in the back garden?

Overseas-a-GoGo-NoNo will make you feel reassuringly guilty by giving you the green light to get going then tell you really shouldn’t be going at all.

Micheál and Leo have a unique business model. But not everyone is impressed by it.

There were questions for the boss, Taoiseach Martin, in the Dáil in the afternoon. He was asked them in light of remarks made by his second-in-command, Tánaiste Varadkar, about the quality of the recent travel advice emanating from their company.

A “green list” of countries deemed safe for international travel had been promised for some time, but its announcement was deferred more than once, driving further traffic to the regions of Alloverdahplaice and Reckinyurhed. Not least because they were also promoting advice against travelling anywhere at all outside Ireland.

Before Leaders’ Questions began in Leinster House, a statement from the Tánaiste’s office set forth his view that this “green list” should be abandoned if the medical advisors to the Government continued to advocate against flying to the permitted hotspots.

“The Tánaiste believes strongly that it’s wrong to send out mixed messages about international travel,” the statement issued by Varadkar’s spokesman said. Did the COO of the Government inform the CEO of the Government about this? Their office suites may be near each other in Government Buildings but, at this rate, they’ll be communicating by carrier pigeon next.

Róisín Shortall, the leader of the Social Democrats, led the charge.

She appreciated the handling of the Covid-19 crisis had been good, and while there were many tragic deaths, matters could have been much worse. But “there is now widespread concern among the public that there is drift”, and we risk undoing the hard work done and sacrifices made by so many over the past four months.

“It has become clear the big weakness is the failure to control the importation of the virus from abroad. There is now major confusion about international travel.”

Róisín pointed out that “promising to announce a green list of countries regarded as safe while at the same time advising against all non-essential travel is inherently contradictory”.

Exactly what Leo Varadkar had been saying in his written statement. It’s not often Róisín and Leo agree on something.

When the Taoiseach replied, his answer was very heavy on the economic fallout from the crisis. We need to keep the infection rate low for the sake of the economy. (Never mind your granny).

“It seems to me you’ve forgotten about the health pandemic and all you are concerned about is business,” alleged Richard Boyd Barrett, to a strong denial from the Taoiseach.

We half expected Labour leader Alan Kelly to ask that question, half joking and half in earnest.

“The issue of travel advice now is becoming a joke,” he told the Taoiseach, once he had removed his muzzle. Sorry, Alan wasn’t wearing a muzzle, it was merely a soft face mask. He must have felt a great sense of freedom without it.

He gave Micheál a soft savaging, pointing out that while he is in the chamber answering questions about travel, Leo is outside it basically saying “what’s the point in publishing a green list at all if the continuous advice is going to be ‘non-essential travel – don’t travel’?”

And, just like Róisín and Leo before him, Alan called time on these mixed messages.

Then he folded his arms, looked at the Taoiseach in smiling incredulity and exclaimed: “But really, I’m beginning to wonder who’s the Taoiseach?”

That was a low blow, delivered with a chuckle and accompanied with appreciative sniggers from all sides.

Because ever since the Fianna Fáil leader took over the reins from the Fine Gael leader, Leo Varadkar has been shamelessly swiping the limelight from under Micheál Martin’s nose. As the new incumbent is run ragged, reading himself into the brief, getting to grips with the requirements of office and wrangling his herd of disobedient backbenchers, his predecessor and appointed successor is having a ball.

Still, to issue a statement from his office with lofty pronouncements from “the Tánaiste” as if he is running a separate empire, earns a universal hats-off for brazen cheek.

Office of the Tánaiste, or the OTT for short.

Of course Alan Kelly wasn’t going to ignore this delicious stand-off clearly manufactured by one of the two principals in Overseas-a-GoGo-NoNo.

The Taoiseach is saying in the Dáil that the green list is due to be published that evening following the Cabinet meeting, he said. “And just outside”, the Tánaiste said that because of the confused messaging he doesn’t see any point in publishing this list.

“So which is it? Is it what you say in here or is it what he says outside?”

By teatime, the Irish Travel Agents Association was calling for clarity. Micheál and Leo’s GoGo-NoNo business model is not acceptable to the trade. They can keep Alloverdahplaice and Reckinyurhed. Dumps, so they are and they don’t want them anywhere near their brochures.

This may be a tripartite Government, but the leader needs to lay down some ground rules or else it’s is going nowhere.

Alan Kelly summed the situation up with his killer line. He seems to have the knack for doing that.

You have to hand it to AK47 – he’s good at saying what we’re all thinking.