Minor changes to North protocol may be agreed to defuse tensions 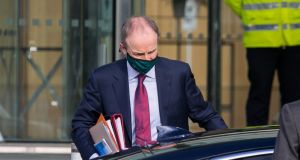 The Government is unlikely to object to minor changes to the operation of the Northern Ireland protocol, as Dublin seeks to defuse the escalating row between the EU and the UK over the controls on trade between Great Britain and the North.

Taoiseach Micheál Martin is expected to speak to First Minister Arlene Foster and Deputy First Minister Michelle O’Neill on Friday, but told the Dáil on Wednesday that the protocol “does need some changes”.

Mr Martin said that “sensible, common-sense modifications could be made in relation to the protocol”.

Government sources said that their efforts were directed at dialling down tensions in the row, which was sparked when the EU said it would trigger a provision of the withdrawal agreement – article 16 – which could have restricted imports of the vaccine into Northern Ireland.

Under pressure from Dublin and following an immediate outcry in London and Belfast, the European Commission quickly abandoned the plan, but the fallout has continued since the weekend.

On Wednesday, British cabinet minister Michael Gove released a letter to commissioner Maros Sefcovic warning him of the “shock and anger” that greeted the EU’s actions and insisting that a number of actions need to be taken by the EU to ease the friction in trade currently between Great Britain and the North because of the measures introduced by the withdrawal agreement.

The British government has asked the EU to extend the current grace period for supermarkets and their suppliers from some restrictions – introduced for three months since January 1st – until 2023. It also suggests that other restrictions on trade between Great Britain and the North as a result of the Northern Ireland protocol, including a ban on some chilled meat products, should be changed or suspended until 2023.

Mr Gove’s letter stipulated that these actions should be taken this week. He met with Mr Sefcovic and Ms Foster and Ms O’Neill on Wednesday to discuss the issue.

Speaking following the meeting, the DUP MP Jeffrey Donaldson said the difficulties with the protocol were “not just short-term, they are long-term”.

“That’s why we need not just a short-term fix or tinkering around the edges of this or kicking the can down the road,” he said.There had to be a “permanent solution that will ensure that we continue to have unfettered access to the UK market and that the EU is able to protect its market, and we need that accommodation reached as soon as possible”.

“We were blindsided [by the EU],” Mr Martin told TDs and Senators.

He said he spoke to EU Council president Charles Michel to emphasise the sensitivity of the protocol. Mr Martin noted Commission president Ursula von der Leyen had reversed the decision quickly but the damage had been done.

“There is pressure on unionism [to get rid of Article 16] but the issues can be worked out without throwing away the protocol,” he said.

There was strong criticism of both Ms von der Leyen and Irish commissioner Mairead McGuinness over the protocol controversy, with Senator Timmy Dooley claiming the Commission president was “out of her depth”.

Mr Dooley said the ongoing political damage suffered here necessitated a proper examination of how the mistake was made. He said Ms McGuinness had said she herself was not personally aware of the decision but the question was whether anyone in her cabinet was aware of the detail of the decision before it was made last Friday.

A Government spokesman said Dublin welcomed “that UK and EU are engaging on a range of issues relating to the implementation of the protocol... We continue to urge all involved to address the issues through engagement.”

Privately, Irish Government sources said that the British government was trying to take advantage of the EU’s mistake last Friday, and warned that London should not push for any dramatic changes to the agreement. However, they expressed no significant objection in principle to the relaxing of some of the border controls between Great Britain and the North.

“We’re trying to be practical but we are committed to protecting the single market too,” one source said.

The source said that Dublin could not see any “dramatic changes” to the operation of the Northern Ireland protocol.

Separately, the North’s Department of Agriculture has not yet made a decision regarding the return to work of employees at Larne and Belfast ports who were withdrawn because of concerns over their safety.

The Police Service of Northern Ireland (PSNI) subsequently said there was “absolutely no information” loyalist paramilitaries were involved in threats or intimidation towards staff carrying out checks at the ports, saying those responsible were “individuals or small groups”.

In a statement, a spokesman said the department “continues to liaise with the PSNI and other partner organisations in considering when physical checks may resume. Any decision will be based upon a formal threat assessment.”