Perils for Ireland in navigating fraught relationship between London and Brussels 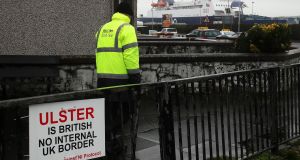 An anti-Brexit sign near the entrance to Larne. Threats from people unhappy about the protocol – even if just messages scrawled on walls by a few individuals, as the PSNI’s assessment seems to suggest – were extraordinarily effective in getting a response. Photograph: Brian Lawless/PA

This week has shown that far from resolving Britain’s long and fraught relationship with the European Union, the finalisation of Brexit has only opened a new and potentially hostile chapter.

From gloating over a speedy vaccine rollout, to making hay over the European Commission’s woeful blunder on Friday, it is clear that conflict and rivalry with the EU remains in demand as political fuel for the British right-wing.

Geography dictates that Britain will always have a complex and involved relationship with the continent. Common interests, and conflicts, are inevitable.

At the moment, all such European affairs are being regarded from Britain through the highly particular lens of whether they retrospectively justify Brexit or not. Due to its sheer volume, proximity and mass, Britain’s opinion and media environment could well have an influencing effect on Ireland’s information space, and how matters that concern us are perceived at home.

In years gone by Brexiteers used to talk about how while Britain would leave the EU it would not be leaving Europe and that relations would be stronger than ever after their exit.

Yet the aim of Brexit was for Britain to diverge. This could be cultural and political, as well as economic. It is possible that this is just one stage in a journey of some of Britain’s political class and media down a narrowing partisan and nationalistic path.

And as long as the country has a prime minister who seems to find his best political momentum in rivalry with the EU, this strong and friendly alliance remains far from sight.

This has clear consequences for the Republic and for stability in the North, which is shaken when relations between Dublin and London are fraught.

Matters can escalate quickly, particularly with right-wing politicians and media in Britain vigilant for missteps or anything that could be interpreted in bad faith.

This was illustrated on Monday when European Commission chief spokesman Eric Mamer replied to a question of mine on how the commission could make such a bad mistake in invoking article 16 of the Northern Ireland Protocol – an emergency trigger that allows either side to intervene if the protocol’s application creates “serious economic, societal or environmental difficulties”.

“I come from a historically Catholic country and in my country we have a saying – only the pope is infallible,” the Frenchman said.

To my ears, it was simply an elegant way of admitting fault. But many British journalists and Brexiteers heard this remark differently and social media was full of angry condemnation and mockery of this reference to Catholicism as either a foolish blunder or a deliberate troll of the Democratic Unionist Party given the religious divisions of the North. After drawing the ire of arch Brexiteer and Labour peer Kate Hoey, it even made a headline in the Daily Express.

During the Brexit talks, Dublin was the EU’s guiding authority on matters concerning the Border and relations with the negotiating team were close. Now that the process has concluded, matters concerning Britain have transitioned into the category of “foreign affairs” as far as the European Commission as concerned. This has structural implications in terms of the personnel and offices that deal with the file.

It is a new arrangement and familiar faces are fading from the picture. Ireland’s great ally Michel Barnier is shortly due to retire from the EU Commission and is expected to enter domestic politics in his native France.

The debacle of last Friday illustrates how Ireland needs to reconfigure its links in Brussels to ensure co-operation on anything that even remotely touches on Northern Ireland and the Border so co-operation is as seamlessly intimate as it was before – a case energetically made by Irish officials in Brussels this week.

The prospect is almost exhausting: though December 31st felt like a finish line, the Herculean efforts put into defending Irish interests during the Brexit negotiations can’t actually be stood down or relaxed. Instead, they must be reconfigured to keep a permanent watchful eye on the many committees tasked with managing the multifaceted aspects of the EU-UK relationship.

The special arrangements for Northern Ireland have locked the EU into continuous engagement on highly contentious issues there. It is perilous for the commission, and Friday revealed shortcomings in its ability to navigate the political sensitivities of the North.

Dublin, London and Brussels all have strong incentives now to demonstrate that solving problems through the official committee route works because in recent days, it was the other strategy that got results.

Threats from people unhappy about the protocol – even if just messages scrawled on walls by a few individuals, as the PSNI’s assessment seems to suggest – were extraordinarily effective in getting a response.

In rapid succession, council port staff and EU officials were withdrawn, port checks were suspended and a political push was launched to ditch the arrangements outright.

It’s a bad incentive to create.