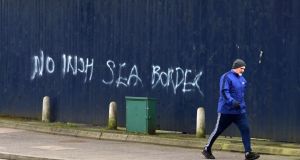 Like journalists across Belfast, DUP representatives were hearing one message from loyalists: this was the final straw. Then, sensationally, the EU triggered article 16 itself. Photograph: Brian Lawless/PA

Northern Ireland’s agriculture department has suspended some post-Brexit food checks at Larne and Belfast ports after a local council withdrew staff over concerns for their safety.

A number of council staff carrying out inspection checks at Larne port were withdrawn from duty following an “upsurge in sinister and menacing behaviour” linked to tensions over the Northern Ireland protocol.

The Minister for Agriculture, Edwin Poots, said on social media on Monday night that he had decided to withdrawal staff from the port of Belfast as well as Larne, saying their safety “remains paramount.” He added that he had spoken to UK government ministers and “outlined the issues of concern.”

All regulatory animal-based food checks have been suspended at Belfast and Larne ports, Northern Ireland’s Department of Agriculture, Environment and Rural Affairs (DAERA) has said.

Mid and East Antrim Council said in a statement on Monday that the councillors had decided unanimously to withdraw all council staff from Larne port with immediate effect because of concerns for their safety and welfare.

This included “graffiti within the local area referencing increasing tensions around the Northern Ireland protocol and describing port staff as ‘targets’ ”, the council said.

This had caused “extreme distress and worry to staff”, and trade unions had raised “serious concerns” about their safety.

The council had “no option but to withdraw them from their duties in order to fulfil its duty of care and carry out a full risk assessment with the PSNI, Food Standards Agency and DAERA,” the statement said, adding that the council apologized for any disruption “but the safety and wellbeing of staff is of paramount importance.”

Twelve council-employed environmental health officers were attached to the port until Monday’s decision, as well as number of senior council officers.

The council’s Chief Executive has advised the Minister for Agriculture of the council’s decision, and further discussions are planned for this week.

The mayor of Mid and East Antrim, the DUP councillor Peter Johnston, said the area had seen “what I would describe as deeply troubling graffiti and a very notable upping of community tensions towards the Northern Ireland protocol, particularly in recent days.

“The health and wellbeing of our staff is always this council’s number one priority and that is why the decision has been taken to withdraw them from their work at the port with immediate effect until we have very real assurances and full confidence that they can go about their duties without fear, threat or concern for their wellbeing.”

Sinn Féin councillor James McKeown, said staff would “only return when we are totally satisfied it is safe and right for them to do so.

“There are simmering tensions within the local community at present and we will not stand by and let our staff be targeted when they are just doing their jobs.”

SDLP councillor Eugene Reid said it was a “disgrace” that Mid and East Antrim council had been forced to withdraw their employees from the port. “The threats need to be lifted and those responsible need to get off the backs of these workers,” he said.

“Over the course of the last number of days, political leaders have fallen far short of the standards we should expect,” he said. “The language used and tone of the discussion relating to the Northern Ireland protocol has raised tensions and whipped up fear.

“It should be the role of all leaders to extract the poison from public dialogue, and I’m challenging everyone to do that. I am also asking that all political leaders clearly and unequivocally condemn those behind these threats and their tactics.”

The Minister for Agriculture, Edwin Poots, said on social media on Monday night that he had decided to withdrawal staff from the port of Belfast as well as Larne, saying their safety “remains paramount.”

He added that he had spoken to UK government ministers and “outlined the issues of concern.”

They are opposed to the protocol because it places a customs and regulatory border between Great Britain and Northern Ireland.

Since it came into operation on January 1st the North’s unionist parties have repeatedly called for it to be scrapped and for Article 16 to be invoked to address problems over the supply of food and other goods to the North.

Mr McEwan said police were “starting to see graffiti” and were “picking up social media sentiment of a growing discontent, particularly within the Protestant/loyalist/unionist community” and suggested that if it wasn’t for Covid-19 there would be street protests. – Additional reporting PA